A native of Lancaster, Kentucky, Alex Miller is a country singer and cattle rancher famous for contesting in American Idol, season 19 in 2021. In 2015, he earned a spot in the Pigeon Forge Path to Fame competition.

Miller is 17 years old as of 2020. His exact date of birth is not yet known. This section will be updated.

Miller is quite tall when it comes to his height. He stands at a height measurement of 6 feet and 5 inches. 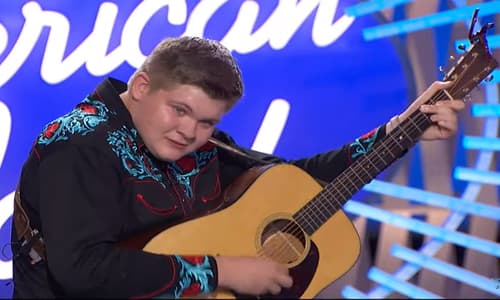 Alex Miller at the American Idol 2021

Miller disclosed that his parents divorced when he was a kid.

Miller is a senior at Garrard County High School (GCHS). He participated in the Future Farmers of America at GCHS and was placed in the Top 15 at the FFA talent competition in 2019.

Miller told the American Idol 2021 judges that his song ” I’m Over You, Get Over Me,” is about his ex-girlfriend, whose name he did not disclose. He has not disclosed whether he is currently dating or not.

Miller is a contestant on the 19th season of American Idol, 2021. For the auditions, he sang his original song “I’m Over You, So Get Over Me,” he wrote about his ex-girlfriend. Alex won the golden ticket to the Hollywood Week after his outstanding performance.

Season 19 of the American Idol’s contestants include:

Miller told WTVQ that he started singing at age 3, playing guitar at age 7, and writing songs shortly afterward. His first public performance was at age 4 at the Gerrard County Fair, where he sang Josh Turner’s “Me and God,” he told the Gerrard Central Record.

“I’m Over You, So Get Over Me” is Alex’s original song which he says he wrote about his girlfriend.