Carl Radke is a charismatic young American Film producer and Tv personality, best known for being a cast member of the Bravo reality series Summer House(2017-2020). He is a short film producer and was an active partner at New York City-located lounges called The Lately and another one called Kind Regards.

Radke stands at a height of 6 feet. 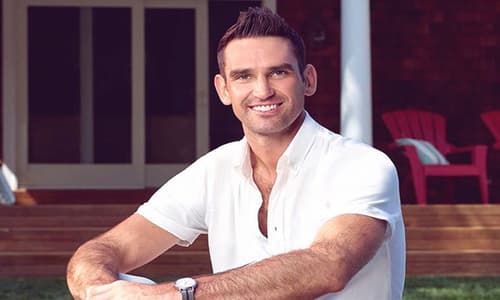 Radke was born as a middle child of his parents’ three sons. He shared in September 2020 that he lost his big brother Curtis Radke, following a long and tough battle with addiction and mental illness. He admitted that he never imagined losing his big brother.

Radke has been in a relationship with two cast members of Summer House. He first dated Dannielle Olivera and later dated Lauren Wirkus. However, he has no wife.

Radke has no children

Radke attended Upper St. Clair High School from where he graduated in the year 2003. He then attended Syracuse University and earned a Bachelor of Science degree in radio, television, and digital communication from the School of Public Communications.

Radke, before joining summer house, had landed a minor role where he played as a milkman in ‘What Perez Sez in 2007. He then almost spent a decade gap in his acting career before starring in ‘Date Night’ with Connie and Chrissy in 2017 and Vanderpump Rules in the same year.

His breakout role came when he was selected for the cast of the summer house in 2017-2020 and credited 37 episodes as starring in all of them. He is one of the cast members of season 4 of the Summer House series. The series premiered on 5th February 2020, at 9 p.m. ET on Bravo. The show is based in Montauk, New York city in the United States. The show depicts several privileged men and women in their late twenties to early thirties who spend their weekends and summer having some fun. Season 4 has added two new friends Luke Gulbranson and Julia “Jules” Daoud to the drunken licentiousness this summer. Both appear to be bringing some notable amount of drama to the Hamptons.

Radke has not revealed the amount of salary he earns at the summer house. Once he does, we will update the information.

Radke has a net worth of between $1 Million – $5 Million in estimation. His income mainly comes from his successful career as a Film producer and Tv personality.