A native of Ada, Oklahoma, Chavon Rodgers is a singer and songwriter who rose to fame after competing in the 21st season of NBC’s reality show, The Voice. Rodgers is also a guitarist and pursued a Physical therapy course in college.

The Voice contestant, Rodgers, is 23 years old as of September 2021. He was born on February 26, 1998, in Ada, Oklahoma. He celebrates his birthday on the 26th of February every year.

Rodgers stands at an approximate height measurement of 5 feet and 8 inches. 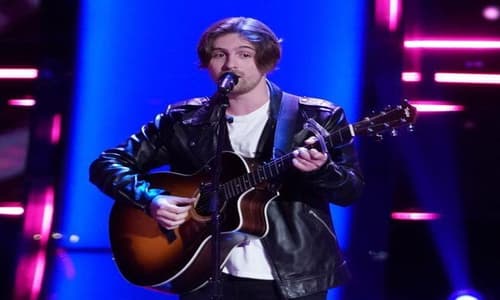 Rodgers is born to a family with a musical background. He grew up in Ada, Oklahoma, and played in a family band in the church where his father/dad was a pastor. The singer has 7 siblings.

The Voice contestant, Rodgers, is a married man. He is married to his wife Phoebe Grace Rodgers, a real estate advisor. The singer met his wife when he was 18 at the time his family moved to Tulsa. The couple married in December 2019.

The Ada, Oklahoma native, Rodgers, is one of  NBC’s reality show, The Voice, season 21 contestants. The season premiered on September 20, 2021, and is judged by Blake Shelton, Ariana Grande, John Legend, and Kelly Clarkson.

The talented singer performed Olivia Rodrigo’s Driver”s License during his blind audition. His performance wowed judges Ariana Grande and John Legend, who turned their chairs. The Tusla, Oklahoma resident chose Team Ariana to be his coach as he progresses throughout the show.

Rodgers works part-time as a County Clerk and the rest of his time is dedicated to his musical career. The singer gigs in cover bands and fills in as a guitarist for local artists (source: NBC )

Rodgers has an estimated net worth of around $200k- $500k. He works part-time as a county clerk and gigs in cover bands. He also fills in as a guitarist for local artists.