A native of New England,  Boston, Cindy Fitzgibbon is an American Emmy Award Winning Meteorologist at WCVB. She is a NewsCenter 5’s EyeOpener and Midday Meteorologist who joined WCVB’s StormTeam 5 in April of 2013.

Fitzgibbon likes to live a private life. Her body measurements are still under review. We will update this information when it is available to the public.

Fitzgibbon was born and raised in New Englander, near Portland. However, she likes to keep her personal life private hence has not yet disclosed the identity of her parents or her siblings. We will update this information as soon as it has been made available. 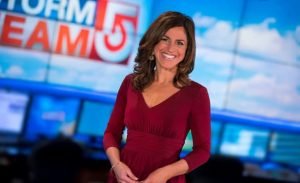 Fitzgibbon has been married to her husband Chris Gobeille, a chief photographer for WBZ since the 7th of June, 1997. The couple is blessed with two sons, the first son was born on October 1, 2005, while the second son Cameron, was born on December 17, 2007.

Fitzgibbon attended the Lyndon State College in Vermont, where she earned her Bachelor of Science degree in Meteorology.

In April 2013, Fitzgibbon joined the StormTeam 5 of WCVB but for the last 15 years has been ‘waking up’ the area of Boston with its forecast! She is a familiar face on Boston morning television, having spent a decade at WFXT as the FOX25 Morning News Meteorologist.

After being nominated several times, Fitzgibbon won the regional Emmy award for outstanding achievement in weather broadcasting in 2017. She also received a “Best Weathercast” prize from the Associated Press. Fitzgibbon forecast a tropical storm that hit Southwest Florida in the midst of the September 11 attacks of 2001 for NBC2 in Fort Myers (François) before joining WFXT in 2002.

Fitzgibbon previously worked as a morning meteorologist for WPTZ, a Hearst NBC affiliate in Burlington, Vermont. She began her meteorology career more than 20 years ago at KXMB-TV, the CBS affiliate in Bismarck, North Dakota.

She is an American Meteorological Society (AMS) member and a National Weather Association member. Also, she received the AMS Seal of Approval for Television. Fitzgibbon has also appeared on ABC News as a guest on World News Tonight and Good Morning America Weekend.

Fitzgibbon volunteers for and supports organizations that promote science education, particularly for young girls, such as the Discovery Museum’s “Smart Gals” Program, the Jr. Sci-Tech Girl STEM Expo, and the Science Club for Girls.

In addition, she frequently gives her time to help raise funds for local organizations in combating ALS (Lou Gehrig’s disease) and MS (multiple sclerotic diseases). She frequently visits schools in the region and has educated thousands of students over the years about the weather.

Fitzgibbon has an estimated net worth of $1.5 million, which she earned throughout her career. Her monthly earnings are still under review.