Clarissa Ward is a television journalist and currently the chief international correspondent for CNN. She previously worked with CBS News covering foreign news and co-anchoring CBS This Morning. She also worked with ABC News and Fox News.

The International correspondent, Ward stands at a height measurement of 5 feet and 10 inches. 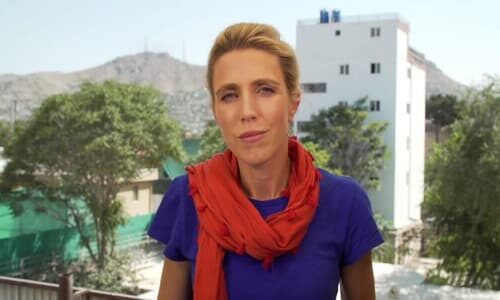 Ward was born to her parents Rodney and Donna in London, United Kingdom. She is the only child in her family.

The CNN chief International correspondent, Ward is married to Philipp von Bernstorff, a portfolio manager at Vulpes Investment Management(2021). The pair tied the knot in November 2016 at Chelsea Old Town Hall in London. Ward met Philipp at a dinner party in Moscow in 2007.

Ward attended Yale University and graduated with a Diploma. She also holds an honorary doctor of letters degree from  Middlebury College.

In December 2020, she reported on how the Russian Federal Security Service stalked Alexei Navalny, a Russian opposition leader, lawyer, and anti-corruption activist for years up until just before he was poisoned in August 2020.

She covered the Military take over in Myanmar, as CNN managed to secure access to the country. Her coverage in Myanmar drew praise and critism in equal measure.

In August 2021, She also reported on the Taliban Surge in Afghanistan, and also interviewed some of the Taliban leaders.

Ward became a CBS News correspondent in 2011. She covered foreign news for the network. She was also a contributor for 60 minutes and served as a co-anchor on CBS This Morning.

Clarrissa worked as an ABC News correspondent in Moscow for 3 years(2007-October 2010). While in Russia, she reported for all ABC News broadcasts. She covered the Russian presidential elections.

The News correspondent was later transferred to Beijing where she covered the Tohoku earthquake and tsunami in 2011.

She also covered the war in Afghanistan.

Ward began her professional career as a journalist in 2003. In her first job, she worked as an overnight desk assistant at Fox News. She then became an assignment editor for Fox News from 2004 to 2005.

While at Fox News, she worked on the International desk and covered a number of notable stories and events. She covered the capture of Saddam Hussein, the deaths of Pope John Paul II and Yasir Arafat. She also covered the Indian Ocean tsunami in 2004.

The journalist also worked as a field producer for Fox News and produced the coverage of the Kidnapping of Gilad Shalit, the Israeli-Lebanese war, the trial of Saddam Hussein, and the Iraqi Constitutional referendum.

While working as a Fox News correspondent and based in Beirut, she covered the execution of Sadam Hussein, 2007 Bikfaya bombings, and the 2007 Iraq War troop surge, among other coverages.

Clarrissa worked as an ABC News correspondent in Moscow for 3 years(2007-October 2010). While in Russia, she reported for all ABC News broadcasts. She covered the Russian presidential elections.

The News correspondent was later transferred to Beijing where she covered the Tohoku earthquake and tsunami in 2011.

She also covered the war in Afghanistan.

Ward earns her income through her profession as a journalist. She has accumulated good fortune throughout the years of her career. However, her estimated net worth and salary are still under review.