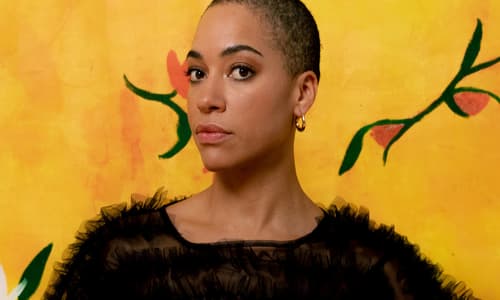 Jumbo’s parents are Angela (mother) and Marx (father). In addition, she has five siblings and she is the secondborn.

Jumbo is happily married to Sean Griffin. She has been married to the Tech Developer since 2014. Together, the couple has a son named Maximillian born in 2018.

Jumbo attended Adamsrill Primary School in Sydenham as a child. Whilst attending Cator Park School for Girls, she trained at the Francis Cooper School of Dance from the age 0f 11 to 15. However, to pursue acting more seriously at the BRIT School in Croydon at the age of 14, she left Cater Park. Moreover, at Central School of Speech and Drama, she graduated with a first from the BA (Hons) Acting course. However, before finally settling on a career as an actress, she considered undertaking teacher training in London.

In the ITV crime drama series Vera (2012, 2015 to 2016), Bethany starred as DC Bethany Whelan. In 2011, she won the Ian Charleson Award for her role as Rosalind in As You Like It. For her role as Mark Anthony in an all-female cast of Julius Caesar in 2012, she earned a Laurence Olivier Award. In the one-woman show, Josephine and I, she wrote and starred in 2013.

Moreover, in William Shakespeare’s As You Like  It, she received the Ian Charleson Award for her performance as Rosalind in 2012. She is set to become one of the best actresses of her generation. She starred as Constance Neville in She Stoops to Conquer at the National Theatre in 2012. Similarly, she earned an Olivier Award nomination as Mark Anthony in an all-female production at the Donmar Warehouse.

Similarly, she performed in her own debut play Josephine and I in July and August 2013. Its premiering was at the Bush Theatre in London. Moreover, in November 2013, she won an Emerging Talent Award at the London Evening Standard Theatre Awards.

In the 2014 autumn, she appeared in the transfer of the Royal Court Theatre production of The River making her Broadway debut. Nevertheless, in 2008, she co-wrote a shortlisted entrant in the Perfect Pitch West End Showcase, the musical Rebels and Retail. In the 101 Dance ideas for 5-11-year-olds, she is a co-author.

In series 2 of ITV’s Vera, she appeared as DC Bethany Whelan Vera starring Brenda Blethyn. For episode 1 of series 6 in 2016, and in 2015 series 5, she returned to show.

Moreover, on BBC Radio 4 in dramas and as a guest on the panel show called Dilemma, she appeared multiple times. In the 2015-2016 CBS series The Good Wife, she became a regular cast until its end in 2016. Her role was reprised in The Good Fight, the series spin-off. She announced her departure from the series after four seasons on May 29, 2020.

Moreover, in the 2019 Birthday Honours for services to drama, she was appointed Officer of the Order of the British Empire (OBE).

Jumbo’s net worth ranges between $1 million and $5 million.