Born Dallon James Weekes, Dallon Weekes is an American singer, songwriter, musician, and record producer. The singer-songwriter is best known as a member of Panic! performing in the band as a bassist, keyboardist, backing vocalist, and songwriter at the disco from 2009 to 2017. 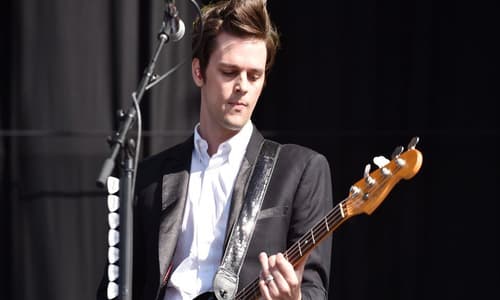 Weekes was born in the small town of Verona, Missouri, the U.S to a Mormon family. Moreover, he is the second child of four children.

The composer has been married to Breezy Douglas since March 18, 2006. Together the couple has two children, a daughter named Amelie Olivia (born June 1, 2008) and a son, Knox Oliver (born June 23, 2010). In addition, his daughter is named after the 2001 French film Amelie whereas his son is named after a character from the 1989 film Dead Poets Society.

Weekes attended Clearfield High School. Here, he met most of his former Brobecks bandmates. Moreover, he graduated with honors in 1999. After graduating, the singer served as a full-time Mormon Missionary in Oklahoma for two years. Furthermore, Weekes shortly attended Weber State University before dropping out to pursue music full time.

Along with a couple of his friends, Weekes formed the band the Brobecks after returning to Utah. The band started with recorded basement demos and went on tours. However, Weekes was offered solo record projects from Interscope Records, Indie Lable, and Sony BMG after a few years. The solo contacts’ condition was for Weekes to perform solo and drop his bandmates which he declined.

The singer was a hired bassist and backup vocalist for the band Panic at the Disco in 2009. However, Weekes was initially inducted as a replacement instrumentalist, he became a full-time member in 2010 while he was touring with the band in China. Furthermore, in 2011, he contributed to the band’s album titled ‘Vices & Virtues’. Moreover, the American musician also worked on the cover art for the project and even appeared on the album’s cover.

Furthermore, Weekes wrote songs for the band’s fourth album titled ‘Too Weird to Live, Too Rare to Die’ in 2013. However, in October 2015, he left the official line-up of this band.

The musician released the single ‘Skid Row’ in September 2010. This made it available for free online download. Moreover, Weekes released his Christmas single titled ‘Sickly Sweet Holidays’ in 2014. The songwriter/singer released ‘Teenage FBI’ the following year. This was followed by Weekes’ second Christmas single ‘Please Don’t Jump (Its Christmas) in November 2016.

Furthermore, in 2015, the American musician started a cover series named ‘TWOMINCVRS’. He utilizes it to self-release the covers of songs that are of a duration of two minutes or less via his own YouTube.

Weekes’ net worth is $4 million.