Born David Jason Muir, David Muir is an American journalist. Currently, he is co-anchor of the ABC News magazine 20/20. He is also ABC’s World News Tonight anchor. In addition, he is based in New York City as part of the news department of the ABC broadcast television network. 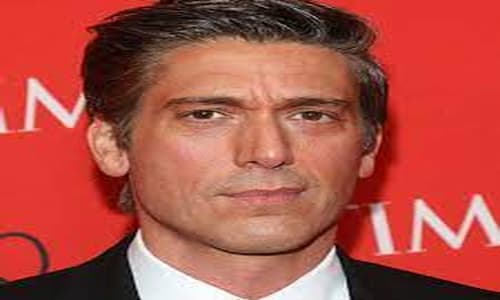 Muir’s parents are Ronald (father) and Pat Mills (mother). However, the two divorced but continued to co-parent amicably. Moreover, he has an older sister, Rebecca. Additionally, he has two younger step-siblings.

Currently, Muir is single but was once linked to his ABC colleague Gio Benitez. The two were seen together on several in 2015. However, Gio got engaged and married his now-husband, Tommy DiDario.

Muir attended Onondaga Central Junior-Senior High School. Moreover, in 1991, he graduated from high school. In addition, in May 1995, he graduated magna cum laude with a Bachelor of Arts degree in journalism from Ithaca College. He interned at WTVH-TV in Syracuse during high school. His professor inspired him when he told him that he had “the cut of a TV Newsman”. At Georgetown, University he spent a semester at the Institute on Political Journalism at the Fund fr American Studies. In addition, at the University of Salamanca in Spain, he spent another semester with the Institute for the International Education of Students.

Muir returned to Syracuse’s WTVH after graduation. He was a reporter and anchor for five years after graduation. Following Prime Minister of Israel Yitzhak Rabin’s assassination, he reported from Jerusalem, Tel Aviv, and the Gaza Strip. The Radio-Television News Directors Association, Associated Press, and Syracuse Press Club awarded him honors for his work.

As a reporter for WCVB in 2000, he leaped to a top 10 market in Boston. For a story he did tracking the plans of the 9/11 hijackers, he earned a regional Edward R. Murrow Award.

In August 2003, Muir started at ABC News as the anchor for the overnight news show World News Now becoming the lead correspondent for the network. In February 2011, he was named the sole anchor of World News with David Muir’s weekend show. Moreover, for the weeknight World News with Diane Sawyer, he was the main substitute.

He took over the weekday newscast in 2014 when Sawyer switched focus to enterprise reporting and primetime specials. As both anchor and managing editor, the show was rebranded World News Tonight with David Muir. September 2, 2014, was his first official broadcast.

Under his lead, World News Tonight broke a 21-year streak in September 2017. The show became the most-watched evening newscast. This had not happened since Jennings was behind the desk. In the May 2018 ratings sweeps, the program continued to be the most-watched nightly newscast.

On January 25, 2017, Muir interviewed Donald J. Trump after the president was inaugurated. He was the first to interview the president and later told WCVB that the interview was “awkward”.

Moreover, during Barack Obama’s visit to Cuba in March 2016, Muir was the only journalist to interview him. He also talked to Tim Cook, Apple’s CEO, when the company and the FBI did not agree about unlocking the San Bernadino killer’s phone.

Inside the Vatican, he interviewed Pope Francis and then moderated a town hall with him, all in Spanish.

He has covered news from Tehran, Mogadishu, Fukushima, Guantanamo Bay, Gaza, Syrian borders, Hungarian, and Amman unafraid to delve into the heart of a story.

The Olympics games, the 2008 Beijing summer games, and the 2010 Vancouver winter games are some of his covered games.

Outstanding Coverage of a Breaking News Story in a News Magazine for, The Amish Shootings, Amish School Tragedy

Best Story in a Newscast for Flashpoint, Refugees in America