Dax Randall Shepard is a multitalented American actor, comedian, director, and podcast host who rose to fame for his role in Punk’d, Without a Paddle, Zathura: A Space Adventure, Employee of the Month, Idiocracy, Let’s Go to Prison, Baby Mama,  and When in Rome. Shepardfeatured and also wrote the script for ‘Get ‘Em Wet’. He directed and starred in ‘Brother’s Justice ‘, a film that won an Audience Award at the 2010 Austin Film Festival.

The Family Game Fight host, Shepard is 46 years old as of 2021. He was born on January 2, 1975, in Milford, Milford Charter Township, Michigan USA.  He celebrates his birthday on the 2nd of January every year.

Shepard stands at a height measurement of 6  feet 2 inches tall. 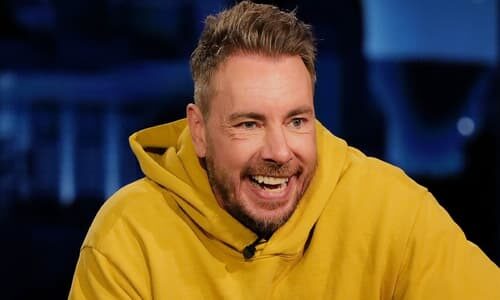 Shepard was born in Detroit. His parents divorced when he was two years old, leaving his mother to raise him as a single parent. His father is named David Robert while his mother is named Laura Labo. David Robert worked as a salesman whereas his mother worked at General Motors (GM). Unfortunately, his father died of lung cancer in 2012. His mother, Laura later launched her own shops, organizing public events. She has been married four times.

Shepard is married to Kristen Bell, an American actress, since 2013. The two met in 2007 at a dinner party.

Shepard, together with his wife Kristen Bell, is blessed with two children; daughters named Delta Bell (born in 2014) and Lincoln Bell (born 2013).

Dax will be teaming up with his superstar wife Kristen Bell in a game show called Family Game Fight. The show premiers on Sunday, August 8, 2021, on NBC at 10:30 p.m ET/PT.NBC has already ordered 10 episodes. The couple will not only be hosting but also acting as competitors.

As competitors, the couple will part ways, each being ‘adopted’ into a different family of four to help them win. They will then take part in a series of fun-filled games in a bid to win $100,000. The show was inspired by the couple’s amusing tactics during a round of Taste buds on their game segment, on the Ellen DeGeneres show. Ellen DeGeneres is one of the show’s producers.

Dax’s first TV role was in Punk’d, a hidden camera prank show that pulled pranks on unwitting celebrities. He had unsuccessfully for the role for 10 years. The show aired for 5 years on MTV and made him quite popular.

From 2004, he featured and starred in numerous films that include Without a Paddle, Zathura: A Space Adventure, Employee of the Month, Idiocracy, Let’s Go to Prison, Baby Mama, When in Rome which also starred his wife Kristen Bell.

Dax featured and also wrote the script for ‘Get ‘Em Wet’. He directed and starred in ‘Brother’s Justice ‘, the film won an Audience Award at the 2010 Austin Film Festival.

In 2012 Dax starred in Hit and Run  alongside Bell and close friend Bradley Cooper, a film he wrote, produced, and co-directed. He wrote and directed as well as starred in a 2014  film called CHiPs.The film is based on the 1977 to 1983 American crime drama called CHiPs.

Together with his wife Kristen, the couple starred in a Samsung commercial for Galaxy Tab S which gained a lot of popularity in September 2014.

Alongside his co-host Monica Padman, Dax launched the podcast,’ Armchair Expert’ on February 14, 2018. The show explores the stories of well known guests.

On June 7, 2018, the show released their first episode of Expert on Expert where they interview experts in their fields. The show was the most popular new podcast on iTunes in 2018.

In 2019 Shepard hosted Spin the wheel, An American trivia and strategy game show that premiered on Fox on 20th June 2019. The final episode aired on 5th September 2019.

Shepard is set to host a new TV show on NBC alongside his wife Kristen Bell, the game show Family Game Fight  Which premiers on Sunday, August 8, 2021, at 10:30 p.m ET/PT.

His verified Instagram account @daxshepard has over 3.4 million followers and close to 600 posts as of 5th August 2021.