Dermot Mulroney is an American actor. He is best known in romantic comedy, western, and drama films for his roles. In addition, he is a classically trained cellist. 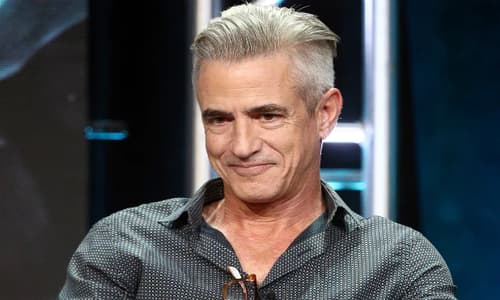 Mulroney was born in Alexandria, Virginia, USA to his parents Michael (father) and Ellen (mother). His father had a private practice in tax law for thirty years in Washington, D.C. prior to being a law professor at Villanova University School of Law in the early 1990s. Additionally, his mother was a regional theater actress.

Furthermore, he has four siblings and he is the middle child among five siblings. He has three brothers and a sister. His two older brothers are named Conor and Sean. His younger brother is named Kieran and is a screenwriter and actor. Additionally, his younger sister is named Moira.

In 1986 when filming Survival QuestMulroney met Catherine Keener. Later, the two lovers got married. The couple has a son together, Clyde Keener who is a singer born on June 21, 1999. However, in May 2005, they separated and on June 11, 2007, Mulnorey filed a divorce citing irreconcilable differences. On December 19, 2007, their divorce was finalized.

Later in 2008, he married Italian Tharita Catulle. They live in Los Angeles and have two daughters namely Mabel (born in 2008) and Sally June (born in 2009).

Mulroney went to Maury Elementary School and acted in children’s community theater, played cello in school as well as city youth orchestras. At George Washington High School, he finished 9th and 10th grades before attending T.C. Williams High School in Alexandria, Virginia. Moreover, he attended the Interlochen Arts Camp as a cellist during his sophomore year in high school. He was a member of the Phi Gamma Delta fraternity and graduated in 1985 at the age of 18 at Northwestern University in Evanston, Illinois.

Mulroney auditioned in front of WMA agent Barbara Gale in his senior year in college after he responded to a sign-up sheet. He was asked to relocate to Hollywood by Barbara after he was offered a contract. Before landing the role of the male lead in his debut in Sin of Innocence, he auditioned for three months. He appeared in a slew of drama films often dealing with the heavy subject matter in his first decade of acting.

He was nominated for Best Supporting Actor in a Miniseries or Movie at the Cable Awards in 1988 for appearing in the baseball flick Long Gone. Coincidentally, he met Catherine Keener in 1989 when he appeared in Survival Quest.

Throughout he appeared in a number of western films. He won the jury prize at The Torino International Festival of Young Cinema for appearing on screen in Bright Angel (1990).

Mulroney has had lead performances in romantic comedy films. He had the male lead in My Best Friend’s Wedding and has appeared in many movies. He also co-starred in the ensemble film The Family Stone with Sarah Jessica Parker. Moreover, as Martin Price, he was in the movie Abduction (2011).

On the TV series Friends in 2003, he played Mavin Mitchell. This marked his last onscreen appearance on television for a number of years. However, he revealed in a May 2007 interview that it was in his favor that he had turned down TV series roles.

“Someone Else’s Used Guitar” is the song he wrote for Peter Bogdanovich’s in 1993. In the Joaquin Phoenix, he also had a cameo. Moreover, on the WBEZ Chicago Public Radio, he occasionally reads stories. In the Fox series New Girl in 2012, he played the love interest of Zooey Deschanel, Russell. He narrates Legends & Lies (2015-2016). In the hit Showtime series Shameless as Sean, he runs a restaurant playing a drug addict who is recovering.

Mulroney’s net worth ranges between $8 million and $14 million.