Edie Falco is an American actress best known for her role on the HBO series, The Sopranos as Carmela Soprano. She is also famous for her role as Nurse Jackie Peyton on the Showtime series Nurse Jackie and as Diane Whittlesey in HBO’s prison drama Oz. 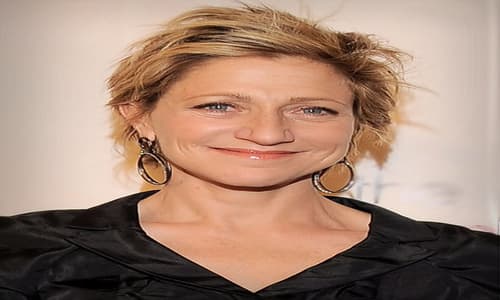 Falco’s parents are Frank Falcon, a jazz drummer and an advertising agency, and Judith Anderson, an actress. Her descent is of English and Swedish. In addition, she has three siblings, two brothers namely, Joseph and Paul, and a sister by the name of Ruth. Her uncle, Edward Falco, is a playwright, poet, and novelist.

Falco has been in two relationships that did not work. However, she has adopted two children, a son named Anderson and a daughter by the name of Macy.

Falco played Eliza Doolittle in a production of My Fair Lady during her senior year at Northport High School where she graduated in 1981. Moreover, she graduated with a Bachelor of Fine Arts in acting from the State University of New York at Purchase.

Falco’s career began as an actress appearing in films such as Sidewalk Stories, Trust, Laws of Gravity, and Unbelievable Truth. Her portrayal in the police drama series Homicide, Life on the Street (from 1993 to 1997), as Eva Thornmann was led by her performance in Laws of Gravity. She also appeared in Law & Order and New York Undercover.

Moreover, her major breakthrough came in 1999 when she landed the starring role of Carmelo Soprano in the HBO crime drama The Sopranos. However, this was in a time when she was in the drama series Oz portraying Diane Whittlesey from 1997 to 2000. Furthermore, she earned three Primetime Emmy Awards, five Screen Actors Guild Awards, and two Golden Globe Awards due to her performance in the critically acclaimed show, “The Sopranos”.

In addition, from 2009 to 2015, her performance in the medical series Nurse Jackie as Jackie Peyton also made her to e widely recognized. Besides, she has appeared and starred in numerous films and her other notable works include in 2016, The Comedian, 2006 Freedomland, 2002 Sunshine State, and 1999 Judy Berlin.