Erin Burnett is an American news anchor who is currently the anchor of her show, “Erin Burnett OutFront” on CNN. Previously, she worked for CNBC co-anchoring “Squawk on the Street” and hosting “Street Signs”. She has also appeared on NBC’s Meet the Press, MSNBC’s Morning Joe, Today, and NBC Nightly News. Also, she has made occasional appearances on The Celebrity Apprentice and served as an advisor to Donald Trump.

Burnett stands at a height of 5 feet and 6 inches. 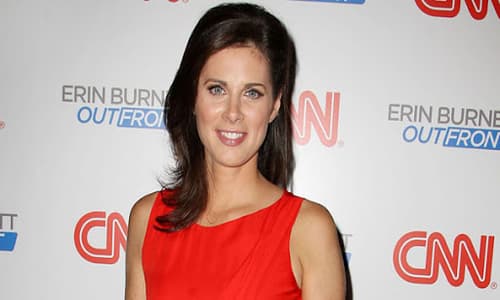 Burnett is married to David Rubulotta. They met in 2003 for the first time, on a blind date. They then got engaged in September 2011. David is a finance executive but was previously a trader for Lehman Brothers. Their wedding took place on December 21, 2012.

Erin commenced her studies at St. Andrew’s School, in Middletown, Delaware. She then graduated in 1994. She then went to Williams College in Williamstown, Massachusetts, and later graduated with a Bachelor of Arts degree in Political economy.

Burnett landed her first job after graduation at The Goldman Sachs Group Inc. to work as a financial analyst. While there, she majored in acquisitions and mergers as well as corporate finance in the division of investment banking.

Burnett was offered a position at CNN while still working as an investment banking analyst. She was given a job to work as a writer and booker for CNN’s Moneyline with Stuart Varney, Lou Dobbs, and Willow Bay. She later left the position to serve as the vice president of Citigroup’s digital media group, CitiMedia. Later on, she joined Bloomberg Television to work as Stocks Editor and anchor. She was the host of CNBC’s Street Signs from 2005 to 2011, as well as the co-anchor of Squawk on the Street with Mark Haines. After working for CNBC for more than five years, she left the network on May 6, 2011.

From October 3, 2011, she joined rival news outlet CNN where she began headlining her prime-time news program, Known as “Erin Burnett OutFront”, which films at the studios of CNN in New York City. On 4th October 2011, she aired a segment titled “Seriously?” on the Occupy Wall Street protests. This made her get accused by a journalism watchdog group called ‘FAIR’ for misrepresenting facts about protesters. CNN, in response to the criticism, stated that “We support Erin and the OutFront team and we highly respect that there will be a range of opinions on any given story.”

Erin Burnett Net worth and Salary

Burnett has an annual salary of $3 million in estimation. Besides, she has an estimated net worth of between $10 million to $20 million. Her income mainly comes from her career as a news anchor.