Gordon Ramsay (born Gordon James Ramsay) OBE is a British chef, restaurateur, television personality, and writer. He has a global restaurant group, Gordon Ramsay Restaurants which was founded in 1997 and has been awarded 16 Michelin stars overall. Currently, it holds a total of seven. 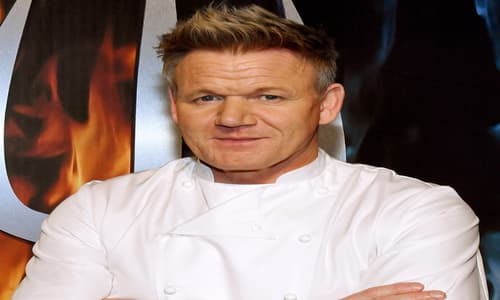 Ramsay was born in the Scottish town of Johnstone to his parents Helen (mother, nee Cosgrove) and Gordon James Sr. (father). His mother was a nurse and his father worked as a swimming pool manager, welder, and shopkeeper. Moreover, Ramsay has an older sister, a younger brother, and a younger sister.

Ramay was sponsored by the Rotarians to study hotel management where he was enrolled at North Oxfordshire Technical College.

The talented chef, Ramsay’s restaurants have been awarded 16 Michelin stars in total. The British chef had aspirations of becoming a football player. However, his hopes of establishing a promising career in football were ended after a knee injury. This led to Gordon then going back to college to complete a course in hotel management. Moreover, the chef trained with some of the world’s leading chefs. The chefs are Albert Roux and Marco Pierre White in London, and Guy Savoy and Joel Robuchon in France.

Additionally, Ramsay became the head of ‘Aubergine’ which was awarded two Michelin stars within three years. Furthermore, the chef set up his own restaurant ‘Restaraunt Gordon Ramsay’. His restaurant quickly received the most prestigious accolade in the culinary world – three Michelin stars. Additionally, London’s longest-running three-Michelin-star restaurant is Restaraunt Gordon Ramsay and the chef is one of only four chefs in the UK to maintain three stars.

Furthermore, the chef has opened a string of successful restaurants across the globe. Moreover, Ramsay is known as a television star to the UK and International audience having appeared in many reality series and cookery shows including MasterChef. In addition, as a reality television personality, the chef is known for his short temper and strict demeanor.

Moreover, Ramsay has also authored a number of books many of which have become bestsellers around the world. Furthermore, the chef had become one of the best-known and most influential chefs in the UK by 2004.

The food critic, Ramsay’s net worth is $220 million.