Brandy Gymani Rhodes is a singer, songwriter, and performer from Atlanta, Georgia, United States.  She is a contestant in the 21st season of NBC’s reality show, The Voice. She grew up in a music background and in the church where both her parents were ministers. The singer participated in chorus and band throughout school. Gymani was accepted at Berklee College of Music after she decided to pursue music. However, she was not able to join due to financial constraints.

Gymani is 23 years old as of September 2021. She was born in 1998, in Atlanta, Georgia, the United States as Brandy Gymani Rhodes.

The amazingly talented singer, Gymani, stands at a height measurement of around 5 feet 7 inches. 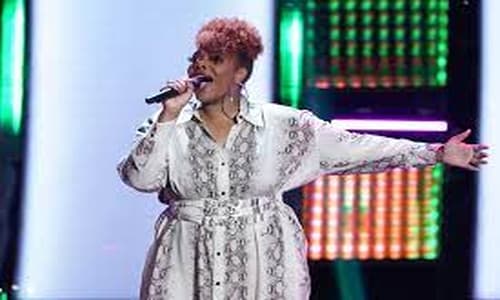 The Voice contestant was born to her parents in Atlanta, Georgia, the United States. She grew up in the church where both her parents were ministers. The singer belongs to a family with a musical background. She has siblings too.

Gymani has two daughters. She welcomed her second daughter in 2020. The singer is a single mother and works two jobs to provide for them. The identity of the father/s to their daughter has been kept a secret.

Gymani is among the contestants of the 21st season of NBC’s reality show, The Voice. The season which is judged by Ariana Grande, John Legend, Kelly Clarkson, and Blake Shelton, premiered on September 20, 2021. She performed POV by Ariana Grande during her blind audition. Her incredible performance saw all the four judges turn their chairs. The four judges were full of praises for her but she could only choose one to be her coach. The singer ultimately chose Team Kelly.

The singer has been gigging in the Atlanta area

The  other contestants  of NBC’s reality show, The Voice, season 21 include:

She has been gigging in the Atlanta area at various events before her appearance on NBC’s reality show, The Voice. Her estimated net worth is under review.