Born Jane Marie Lynch, Jane Lynch is an American actress, comedian, and author. She is best known for starring in the Fox musical comedy series Glee as Sue Sylvester. Her performance earned her a Primetime Emmy Award. 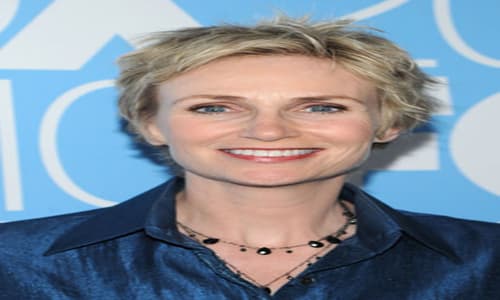 Lynch was born in Evergreen Park, Illinois to her parents Frank Joseph (father) and Eileen (mother). Her father was a banker and her mother was a homemaker-secretary.

Lynch married Lara Embry in 2010. However, in 2014, the couple separated. Moreover, she has a daughter named Haden and another adoptive daughter name Chase.

Lynch acted in the Steppenwolf Theatre Company in Chicago for 15 years. She was one of only two women picked to join The Second City comedy troupe at the time of her audition. At Annoyance Theatre, she played Carol Brady in the theatre’s The Real Live Brady Bunch continuing to hone her comical and improvisational skills.

In 1988, Lynch started in films. She was playing a small role in the film Vice Versa. She was a reporter in Fatal Instinct. Moreover, she had a secondary role as a doctor in The Fugitive.

She made numerous television commercials during the 1990s. In addition, she played Christy Cummings. She was also in Guest’s 2000 dog show mockumentary, Best In Show. She was a staple in Guest’s casts.

Lynch has appeared in many television series. They include Judging Amy, Law, Desperate Housewives, Two and a Half Men, and Gilmore Girls to name a few.

Moreover, in 2002’s MDs she starred. In the crime drama Criminal Minds, she appeared as Spencer Reid’s schizophrenic mother. She narrated Out & Proud in Chicago in 2008.

She appeared as a regular cast member of the Fox series Glee beginning in 2009. In addition, she hosted the NBC game show Hollywood Game Night on July 11. 2013. Furthermore, she co-hosted the NBC special New Year’s Eve with Carson Daly on December 31, 2013. She guest-starred in the television series Girl Meets World in 2015.

She was reported to appear in a recurring role on the Netflix comedy series, Space Force in May 2020. Vulture reported on July 8, 2020, that she would host a revival of The Weakest Link on NBC.