Born Joseph Francis Buck, Joe Buck is an American sportscaster. He is the son of sportscaster Jack Buck and is best known for his work with Fox Sports. In addition, he is also known for his roles as lead play-by-play announcer for Major League Baseball coverage and the network’s National Football League. 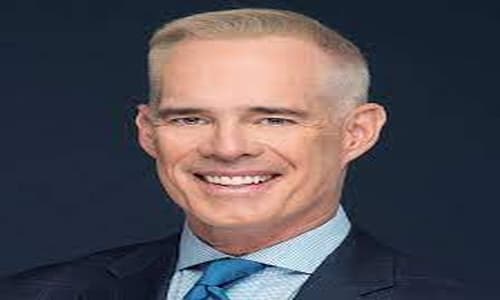 Buck married Michelle Beisner on April 12, 2014. Together, the couple has twin sons, Wyatt Joseph and Blake Andrew. Michelle is a former Broncos cheerleader and is currently an ESPN reporter.

However, Buck had previously married but the marriage did not last.

Buck attended St. Louis Country Day School. He was an undergraduate at Indiana University Bloomington when he began his broadcasting career in 1989.

Buck’s dad left the booth and told him to take over on his 18th birthday. This was his first broadcast and he did the play-by-play for one inning of a Cardinals-Mets game. Through the play-by-play commentary for Louisville Redbirds, a minor-league Cardinals team, he started his broadcasting career.

Moreover, in 1991, he received an opportunity yet again for Cardinals games on KMOX television and radio. Things took an upward trend from then and sportscasting was written in his stars.

In 1994, he became the youngest man ever to announce on network television when he was hired by Fox. At just 25 years of age, he had a daily schedule of the National Football League.

It was televised on Fox Broadcasting Company (Fox) when Fox Sports produced NFL.

He became the lead play-by-play voice for Major League Baseball for Fox in 1996. Here, he teamed up with Tim McCarver.

He was known in Louisville Redbirds as play-by-play in the minor league before joining Fox. While covering Triple-A All-Star Game, he wrote for ESPN.

After joining Fox Sports, Buck did not quit calling for Cardinals games. Prior to working with FSN Midwest, he had worked at KMOX with his father. He left FSN Midwest Telecasts for Cardinals in 2008. For the first time, a member of the Buck family had not been part of the broadcasting team since 1960.

On the network’s #4 NFL broadcast, he became a play-by-play man with Tim Green as his color analyst. He became Fox’s main play-by-play man in 2002 having worked for many years as an analyst.

As a sideline reporter with Erin Andrews, he currently serves as a color analyst with Troy Aikman.

Joe Buck Live, and a series of HBOs was hosted by Joe. However, Joe Buck Live was canceled after three episodes. The 2009 premiere was infamously stolen by Comic Artie Lange. However, two more episodes aired in 2009.

In March 2010, he told the St. Louis radio station that HBO might plan to cancel Joe Buck Live. He added that it required more effort and difficulty than he had ever expected and that he won’t miss the program.

Subsequently, the cancelation of the program was reported by HBO to Broadcasting & Cable.