A Baltimore, Maryland native, Katyrah Love is a singer-songwriter, skilled percussionist, and poet. Her real name is Katyrah Davenport and is famous for competing in the 20th season of ABC’s reality singing show American Idol.

The American Idol contestant is 23 years old as of 2022. However, Love has not disclosed her exact date and month of birth thus it is not known when she celebrates her birthday. According to the singer, she grew up in a musically inclined family with all of her siblings singing or playing instruments. Moreover, Love grew up singing in church. 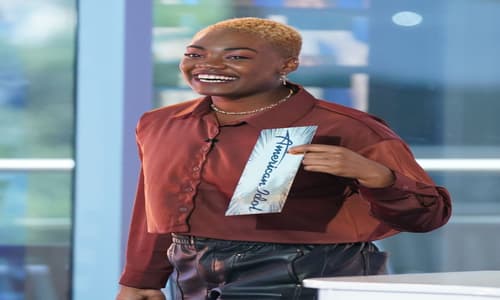 Love was born in Baltimore, Maryland to her parents. However, the singer has not disclosed her parents’ identities. Moreover, Katyrah says that she was born into a musical family. In addition, they used to sing in church with her siblings.

Love works at Learn N’ Play Summer Camp. Moreover, the Baltimore native has won amateur night at Apollo Theater in New York on at least three occasions. Additionally, she was one of 10 artists to make the finals of the Super Top Dog Competition in 2019. Moreso, Love also performed in the theater’s Christmas show in 2019. She also said that she grew up in a musical family and that all the other members of her immediate family sing. Moreover, on a Vibin’ in Ashley Live podcast, the singer said she and her siblings sang in church as a group called “Drops of Blessings”.

In addition, the homeless youth support facilitator said she likes to perform a wide range of music from opera to jazz to gospel. Similarly, Katyrah credits her participation in the Baltimore open mic scene as encouraging the birth of Katyrah Love. Furthermore, the contestant’s real name is Katyrah Davenport, and the stage name was pretty much an accident as she admits. When the singer performed at open mics, fans wanted to follow her on social media. Katyrah’s Instagram handle at the time was Katastrophe and she needed something better. However, she couldn’t make it Katyrah so she added underscore love and that just resonated with her. The singer adds that she puts love into every single thing she does.

Additionally, she is also a percussionist and a poet. Moreover, Love auditioned for The Voice in early 2020. That same year, Katyrah helped curate an online weekly open mic to keep the arts alive during the pandemic. Moreover, Love also worked as a peer support facilitator for Springboard Community Services’ youth homelessness project, funded by the mayor’s office of Baltimore.

However, the singer has not released the music yet. Love was featured vocalist on a single called “Everything You See”, released by the 4TR last summer.

The Baltimore native is one of the contestants of season 20 of ABC’s reality singing show American Idol. The season’s judges are Luke Bryan, Lionel Richie, and Katy Perry and it premiered on February 27, 2022.

Katyrah’s audition was aired on March 27, 2022, shortly after the Oscars. Love performed a rendition of Bishop Briggs’ ‘River’ during the audition. She earned a round of applause from all three Idol judges. She received a Golden Ticket to move to Hollywood week.

Love is a homeless Youth Support Facilitator who connects homeless youth to resources, housing programs, and more so that they can survive. Katyrah hopes to be a ‘symbol of hope within her city.

Love is active on Instagram with more than 20,000 followers. Moreover, she is also active on TikTok and has more than 200,000 likes.