A Raleigh native, Kaylin Roberson is an American singer-songwriter. She is best known for contesting in the 20th season of ABC’s reality singing show American Idol. 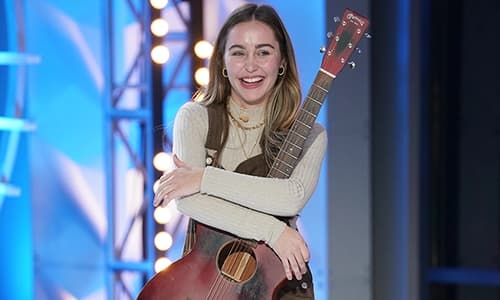 Roberson was born and raised in Raleigh by her parents. However, the identities of her parents are currently unavailable. Moreover, in an interview, the country music singer mentioned that her parents were the first ones to recognize her talent as a musical artist. In addition, she has a sibling, a sister though it is not known if she has any other siblings in her family.

Roberson is currently in a relationship with her boyfriend Matt Gorman of Philadelphia. Moreover, on March 21, 2022, the two lovebirds auditioned together on American Idol season 20.

The American Idol contestant’s musical journey started due to an accident in her childhood days. At the age of 9, Roberson was a victim of a dog attack, so brutal that she was put on a life support system. Moreover, the Raleigh native had over 200 face stitches along with a facial reconstruction that left permanent scars on her face. Moreover, as a fourth-grade student, the singer was also a victim of bullying in her school. However, after going through so much pain in her youth, Kaylin needed a place to vent out her feelings and emotions, and music was her perfect cure. Additionally, from then on, Roberson found solace in music and started her musical journey.

The 23-year-old Raleigh native started performing at local restaurants and bars in Raleigh, North Carolina, and built up a huge local fanbase. In addition, she decided to move to the music city Nashville after playing for years in the eateries at the age of 19 to boost her singing career. Since then, Roberson has written over 200 songs and has achieved new heights. The Nashville artist and songwriter’s songs are also featured on Spotify editorial playlists like New Music Nashville and Fresh Finds Best of Country 2020.

Roberson’s first release, Out of My Town in 2020 was ranked among the top 10 in the NSAI Song Contest. Additionally, Big Fish, the singer’s single was released in June 2021 and also featured in American Songwriter. Moreover, she has another single titled ‘When He’s Been Drinking’ also made big waves on all the music streaming platforms.

Furthermore, the American Idol contestant solo songs such as Break Up Proof, Out Of My Town, and Know You Like That is also available on Spotify, Apple Music, iTunes Store, Amazon Music, Deezer, and Pandora. In addition, she released her latest new single, Because Of Me on February 25, 2022.

Additionally, the Nashville artist has over 2 million streams on Spotify and has had numerous videos featured on CMT. Moreover, she has a YouTube channel, Kaylin Roberson with over 2.55k subscribers.

Roberson is one of the contestants in the 20th season of ABC’s reality singing show American Idol. The show’s judges are Katy Perry, Lionel Richie, and Luke Bryan. It premiered on February 27, 2022.

The Raleigh native’s audition was aired on March 21, 2022, on ABC. Kaylin auditioned alongside her boyfriend Matt Gorman. The duo performed a duet of an original song called Fast Forever. However, Matt did not go through to the next level. Fortunately, Roberson got a Golden Ticket to Hollywood week.

Roberson is active on Instagram under the handle @kaylinroberson with over 23k followers as of March 2022.