Leigh Peta Sales AM is an Australian author and journalist. Previously, Sales hosted the Australian television channel ABC’s news and current affairs program 7.30. In addition, in 2019, Leigh was appointed a Member of the Order of Australia for her services to broadcast journalism.

Sales was born in Brisbane, Queensland, Australia to her parents. However, Leigh has not disclosed her parents’ identities or if she has any siblings.

Sales was married to her husband, Phil Willis. Moreover, together the couple has two sons. However, the duo separated in December 2016 after 20 years of marriage.

Sales attended Aspley State High School in Brisbane. Additionally, she earned her bachelor of journalism from the Queensland University of Technology. Moreover, Leigh received her master of International Relations from Deakin University.

The journalist joined ABC in Brisbane in 1995. Additionally, she has held several prominent roles with ABC and was a New South Wales political reporter covering the 1999 and 2007 state elections. Moreover, Sales reported on the 2000 Summer Olympics. Besides, she was the network’s Washington correspondent from 2001 to 2005. Moreover, Leigh covered stories including the Iraq War, Guantanamo Bay, Hurricane Katrina, and the 2004 U.S. presidential election.

Furthermore, she was ABC’s national security correspondent from 2006 until 2008 and was based in Sydney. Moreover, Sales was a co-host of ABC Lateline, a late-night national current affairs show with a heavy emphasis on federal politics and international from 2008 to 2010. In addition, she also hosted ABC’s Australia Votes for the 2016 Australian Election and again for the 2019 election and hosted her last in 2022.

Moreover, in December 2010, she was appointed anchor of ABC’s current affairs program, 7.30. Furthermore, Leigh has interviewed every living Australian prime minister and many world leaders and celebrities. Additionally, they include; the Dalai Lama, Hillary Clinton, Salman Rushdie, Paul McCartney, Patti Smith, and Aung San Suu Kyi. Moreover, she announced in February 2022 that she will step down from 7:30 in June 2022 following the federal election. However, Sales plan to continue working for ABC.

Sales published, Detainee 002: The Case of David Hicks, her first book in 2007 by Melbourne University P[publishing (MUP). Moreover, her second book, On Doubt was published as part of MUP’s series Little Books on Big Themes in 2009. Additionally, Leigh’s third book, Any Ordinary Day was published in October 2018.

In addition, her writing has also regularly appeared in major Australian publications. The publications include; The Australian, The Sydney Morning Herald, The Monthly, The Age, and before its demise, The Bulletin.

Furthermore, she wrote an opinion piece for ABC in September 2021 exploring the issue of bullying received by journalists on Twitter which she described as “insidious” and “unhinged.”This was in the wake of fellow ABC presenters Hamish Macdonald and Lisa Millar both deactivating their Twitter accounts due to the high level of personal abuse they received on the platform. Moreover, her opinion piece in turn prompted a public conversation on the topic.

Sales started a podcast called Chat 10 Looks 3 in November 2014 with Annabel Crabb. Moreover, the podcast is independent of the work they do for other media outlets. Additionally, it is an opportunity for them to talk about books, television, media, movies, and culture. In addition, at the 2019 Australian Podcast Awards, the podcast won two awards in the ‘Literature, Arts & Music’ and ‘TV, Film & Pop Culture categories.  Moreover, the podcast episodes are recorded every two to three weeks and Sales and Crabb describes it as shambolic and peripatetic.

Furthermore, the podcast has spawned a book titled Well Hello published in September 2021, and live-stream shows in Australian capital cities. Moreover, a Chat 10 Looks 3  community was formed by self-proclaimed ‘chatters or chatterati’ on social media platforms built around the same tenets as the podcast – friendship, kindness, and an agreement to not discuss politics.

Besides, the journalist has said that a community has sprung up around (the podcast) that shares these in-jokes and language, and interests.

Sales’ net worth is $2 million. 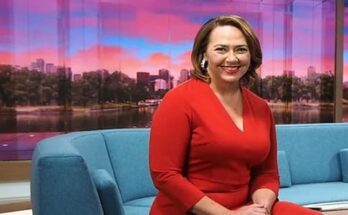