Born in Dyer, Indiana, Megan Glaros is an American meteorologist who works for WBBM-TV in Chicago.

She was previously working as the weekend meteorologist for WCBS-TV in New York, as well as an entertainment reporter.

Glaros is of average height, she stands at a height of  5feet 7 inches (Approximately 1.7m) 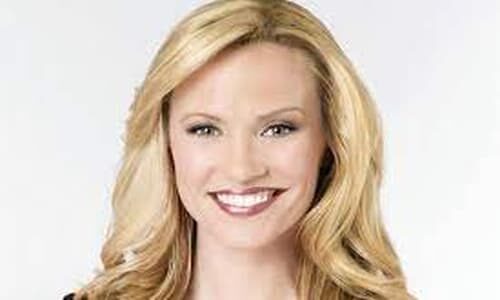 Glaros is married. However, information regarding her husband is not available. The couple has three children together. Her first child, a daughter named Lana, was born on February 11, 2010. Later in June 2012, the couple welcomed twins, a boy and a girl named Leo and Willow.

Glaros attended Texas Christian University and later Indiana University, where she studied atmospheric sciences and journalism. While in high school and in college, she modeled professionally.

Glaros is also a dancer and she trained at The Dance Gallery in Munster, Indiana, Ruth Page Center for the Arts, and Lou Conte Dance Studio.

Glaros began her career in Parkersburg, West Virginia before moving to Baltimore, Maryland, where she worked for Sinclair Broadcast Group, forecast for up to five different cities a night.

In September 2004, Glaros moved to South Florida where she became the Local 10-morning news meteorologist and host of SportsJam Live. During her time there, Glaros dealt with the very active hurricane seasons of the past few years. She forecasted Hurricanes Katrina, Rita, Wilma, and many others. She also filled in on Good Morning America many times while working in Miami.

In May 2008, Glaros joined WCBS-TV, as the weekend morning meteorologist and as an entertainment reporter during the week.

From August 30, 2010, she began working as a meteorologist for the CBS 2 Chicago Morning News at 4:30, 5, 6, and 11 am. She has also covered weather news and reporting for CBS This Morning and the CBS Evening News, including reporting on hurricanes Florence and Dorian.