Michael Strahan is an American journalist and television personality. He is a former professional American football player and played all 15 seasons of his career with the New York Giants of the National Football League. 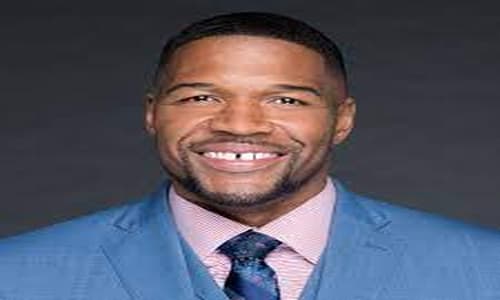 Strahan’s parents are Louise (mother) and Gene (father). His late father was a retired army major and a boxer whereas his mother is a basketball coach. In addition, he is the youngest of six children.

He became engaged to Nicole Murphy, Eddie Murphy’s former wife, in 2009. However, in 2014, the couple split.

Strahan was quick to adapt to the competition and his new football environment as he had in high school and college. He became a full-time starter for the Giants in the league during his second year. Moreover, in 1997, he registered his first double-digit quarterback sack season with 14. For his efforts, he earned his first trip to the Pro Bowl.

He proved to be a dominating defensive force for the Giants over the next decade. Moreover, he set an NFL single-season record with 22.5 sacks in 2001 following a 15-sack campaign in 1998. He was ranked fifth in NFL history at the time of his final game after eventually compiling a total of 141.5 sacks, ending his career on a high note.

The star veteran returned to the Giants after mulling retirement for the 2007 season. He led the club to its first Super Bowl victory in nearly two decades along with quarterback Eli Manning. However, they had an upset win over Tom Brady and the undefeated New England Patriots in the championship game.

He announced his retirement from football soon after the big victory.

It was generally believed that Strahan had a future in television even before he had left the game of football. He was hired as a football analyst with FOX Sports following his retirement. Moreover, he has also done several Subway sandwich chain commercials.

Live! With Kelly and Michael

Strahan starred in the short-lived FOX sitcom Brothers in the fall of 2009. In September 2012, he was named the new co-host of Live! With Kelly. He teamed with Kelly Ripa filling the spot formerly held by longtime host Regis Philbin. The syndicated show was renamed Live! With Kelly and Michael.

In early 2014, Strahan was voted into the Pro Football Hall of Fame. The same year in April, he joined Good Morning America as a part-time correspondent. In April 2016, ABC announced that he was leaving Live! With Kelly and Michael. He joined Good Morning America on a full-time basis. Considering Ripa learned of his plan to exit just minutes before going on air, the move was surprising and controversial. It had to put a strain on their relationship, needless to say.

However, Strahan said he had no regrets in a 2018 interview with E!

He became the new co-host of GMA Day’s third-hour slot with Sara Haines, The View former panelist, in the fall of 2018. The show was renamed Strahan, Sara, and Keke in 2009 after actress Keke Palmer was added as a third co-host.

NFC Defensive Player of the year

Strahan’s net worth is $65 million.