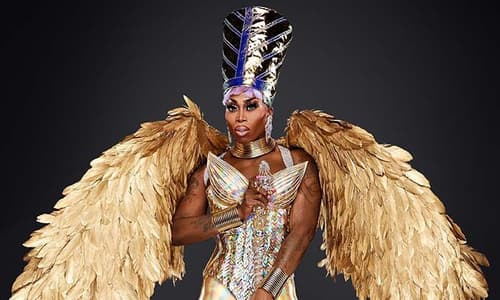 Heart was born in Long Island, New York to her parents. The drag queen grew up in Brooklyn, New York. Later, she moved to Kansas City, Missouri after graduating from high school.

The drag race contestant is openly gay. According to her, at the age of 17, while working at Burger King, He first realized he was gay. However, Heart keeps her personal life under lowkey hence she has not revealed whether she is dating or not, or whether she is married or not.

The drag queen, Heart began her career as a drag queen at Hamburger Mary’s emceeing bingo and hosting Sunday drag brunch. Firstly, she went with the name Monique Kutabetch Heart. Moreover, she created the name Monique Heart in 2011. Later, she changed her drag name to Mo Heart.

Moreover, Heart hosted the Amazon Music original fashion-themed TV series, The Walk-In where she interviewed celebrities as they show off some of their iconic fashion moments throughout their careers.

Reason for changing her name

The drag queen changed her name because she is growing as an artist. She also stated that she believes that artists should always evolve and grow and that she just felt like she as an individual just want to give more heart, more love, more everything, and just for branding, it makes sense to be just ‘Mo’.

Moreover, she added that the name Monique felt like she was subscribing to a binary on the feminine side. This prompted her to shift her moniker to reflect both her spirit and her new creative endeavors. They include evolution into a mogul with her Mo Beauty line.

The drag queen, Mo is a recording artist and she released her debut single Brown Cow Stunning on January 4, 2019. However, during RuPaul’s Drag Race All-Stars season 4 premiere where she was a contestant, she performed her single. In addition, she released another single ‘SUKM (Kiss Me). Moreover, her EP titled Beloved SoS 6.3 was released in 2020.

Heart owns her own beauty company, MoBeauty which sells skincare products. For more of the drag queen’s beauty products visit her company website via https://mobeautyshop.com/

The drag queen, Mo is one of the nine contestants of the television series RuPaul’s Drag Race: UK vs. The World which premiered on February 1, 2022. The queens from across the global Drag Race franchise will be competing for the queen of the world crown.

Heart’s net worth ranges between $1 million and $5 million.