Nicolle Wallace is an American author and television host. Her work as the anchor of the MSNBC news and program Deadline: White House brought her into the limelight. In addition, she is a former co-host of the ABC daytime talk show The View.

Wallace was born on February 4, 1972. Therefore, she is 49 years old as of 2021 and celebrates her birthday on 4th February every year. 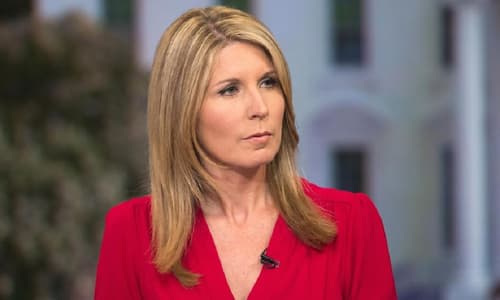 Wallace was born in Orange County, South Carolina to her parents. Her father was an antique dealer whereas her mother was a third-grade teacher’s assistant in public schools. Additionally, she has three siblings and she is the eldest of the four. Her siblings’ names are Zack, Courtney, and Ashley Devenish.

Wallace was married to Mark Wallace, an American businessman, lawyer, and former diplomat from 2005 to 2019. The couple had their first and only child, a son in 2012. Both she and her husband publicly supported the legalization of same-sex marriage in February 2013 in an amicus curiae brief submitted to the U.S. Supreme Court.

Wallace started her career working in California state politics and she is an on-air reporter in California. Moreover, she moved to Florida to serve as Governor Jeb Bush’s press secretary in 1999. Later, for the Florida State Technology Office, she became the Communications Director in 2000. Moreover, she worked on the 2000 Florida election recount.

Serving as special assistant to the President and director of media affairs at the White House, Wallace joined the White House staff during George W. Bush’s first term. Here, she oversaw regional press strategy and outreach. Moreover, she joined Bush’s 2004 presidential campaign as its communication director in 2003. she delivers her political attacks without snarling according to The New York Times.

Bush named her White House Communications Director on January 5, 2005. In July 2006, she left the White House to relocate to New York City.

For the McCain 2008 presidential campaign, Wallace served as a senior advisor. As the campaign’s top spokesperson and defender, she appeared frequently on network and cable news programs.

Furthermore, in the 2012 film Game Change, she was portrayed by Sarah Paulson. She stated eight years later that she did not vote for a presidential candidate in 32008 because Sarah Palin gave her pause.

She joined The View as a new co-host. However, she left THe View and joined NBC News and its cable network MSNBC as a political analyst. Moreover, she is a frequent contributor and guest host on MSNBC programs Morning Joe, NBC’s Today Show as well as The 11th Hour with Brian Williams. She served as an analyst for MSNBC’s live coverage of election results in November 2016. Furthermore, since May 9, 2017, she has been the anchor of the afternoon news and opinion program Deadline: White House on MSNBC.

Wallace’s net worth is $4 million.