Omar Zaheer is an Avian and Exotic animal Veterinarian and a television reality star. He is one of the castaways of the CBS reality series Survivor season 42. 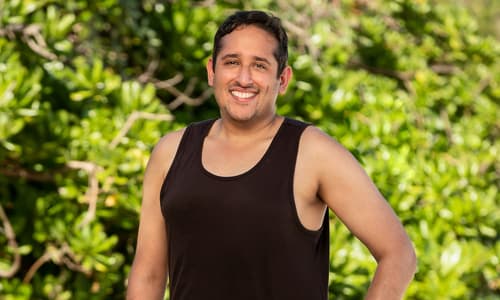 Zaheer was born in Kitchener, Ontario to his parents. However, the castaway, Omar has not disclosed his parent’s identities. Unfortunately, Zaheer’s father passed away on July 14, 2017, after years of battling pulmonary fibrosis. Moreover, the castaway says his mother is doing well as of 2022. Omar also took inspiration from his older sister Juveria Collins who acted as a parent to him and his younger sister. Moreover, Omar is of Indian Canadian ethnicity and follows Islam.

Zaheer is in a relationship with his girlfriend Sarah Jajou, a veterinary doctor who is waiting for him o come back victorious from Survivor 42.  Additionally, Omar and Sarah have been together for almost seven years. Moreover, the castaway says that his girlfriend is sweet, kind, funny, most lowkey savage, beautiful, and talented. He also added that she is the roadrunner to his coyote.

Zaheer graduated with an honors Bachelor of Science from the University of Guelph. Additionally, the castaway attended Ontario Veterinary College (OVC) for his Doctor of Veterinary Medicine degree.

Zaheer is an Avian and Exotic Animal Veterinarian. Currently, the castaway works at the 404 Veterinary Emergency and Referral Hospital.

Additionally, from 2018 to 2021, he completed his residency at the OVC in avian and exotic medicine and surgery. Here, the doctor published several articles such as a new surgical technique for cloacal prolapse in pet parrots. In addition, he did an anesthetic study on quaker parrots, and several case reports on pet exotics such as chicken, guinea pigs, and rabbits.

Furthermore, Omar teaches third-year veterinary students the avian, reptile, and amphibian units of Comparative Animal Medicine. Moreover, some of Zaheer’s work was presented at the Association of Avian Veterinarians conference in 2020.

Zaheer is a Survivor season 42 castaway. He is a veterinarian and his hometown is Kitchener, Ontario. However, he currently resides in Whitby, Ontario. Omar’s hobbies include training animals, settlers of Catan, and watching Tv. In addition, Omar describes himself as silly, empathetic, and shameless. Moreover, he hates people who complain about the cost of vet care, rudeness, feeding seeds to parrots, and gym runners. He also hates when people talk bad about pigeons and institutional racism.

The castaway says that he is most proud of setting his mind to become an exotic animal specialist as an undergrad. Zaheer also said he had a difficult childhood both financially and emotionally. In addition, the castaway says that his father still remains his hero despite having many shortcomings.

Omar says that he will play the game most like Rob Casternino’s strategic prowess. He added that Rob really understood the power dynamics and when to shift the game. Furthermore, the castaway says that he believes he can be the sole survivor because he must adapt.

Zaheer’s net worth ranges between $500k and $1 million.

Zaheer is active on Instagram under the handle @ozaheer24 with over 3500 followers.