Pangina Heals is Pan Pan Narkprasert (real name) stage name. She is a Thai drag queen and judge on Drag Race Thailand who later went on to compete on RuPaul’s Drag Race: UK Versus the World. In addition, he is often called the RuPaul of Thailand and has been described as one of the most popular drag performers in Asia. 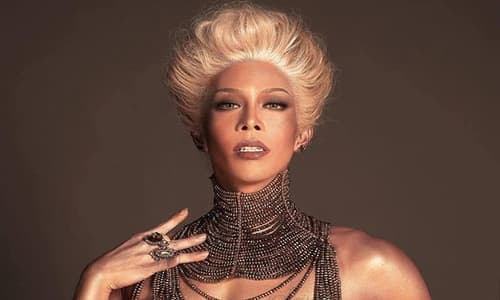 The drag queen was born in Bangkok to a Taiwanese mother and a Thai father. In addition, she has a darg daughter named Felicity Heals, who appeared on the casting special of the second season of Drag Race Thailand making it to the Top 40 of the casting process. Moreover, her drag daughter, Felicia is one of the only cisgender female queens to appear on the Drag race franchise.

The drag queen has kept her personal life under lowkey hence has not publicly disclosed whether she is currently dating and has a partner or not. However, she once had a boyfriend.

The drag queen graduated from the University of California, Los Angeles (BFA).

The drag queen, Pangina is a well-known host in Thailand’s drag circuit and hosts a weekly LGBTQ+ night in Bangkok at the upmarket cabaret bar Maggie Choo’s.

After joining the main cast of the play, The Lisbon Traviata where she portrayed Mendy, the drag queen made her acting debut.

Moreover, the drag queen opened for Tube Gallery’s 20th-anniversary fashion show. In addition, Heals is a part of \the lineup for Melbourne’s Drag Exp in 2020. Furthermore, she hosted an online talent competition, Queer Got Talent in June 2021.

Additionally, the drag queen is the creator and owner of a drag bar, House of Heels.

The drag queen Pangina participated in Thailand’s version of Lip Sync Battle and won the competition with a rendition of Lady Gaga’s Telephone. Moreover, Heals competed and won a Thai reality show where 13 local gender-benders competed in singing, dancing, and impersonation challenges called a T Battle. Additionally, the queen competed on Thailand Dance Now. Moreover, in 2018, the drag queen was announced to co-hostDrag Race Thailand, a Thai spin-off of RuPaul’s Drag Race.

In addition, in January 2022, the drag queen was announced as one of the nine contestants on RuPaul’s Drag Race: UK Versus the World. This makes her the first-ever contestant to have judged an iteration of the show before entering the competition.