The American television personality and rapper, Rasheeda W. Buckner, was born on May 25th, 1976 in Atlanta, Georgia, United States. Frost is 45 years old as of 2021. She celebrates her birthday on May 25th every year.

Buckner is the loving daughter of Shirleen Harvell, her mother. There is not much information about her parents nor her siblings nor her relatives. This information is currently under review and will soon be updated. 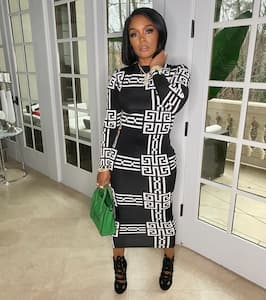 Rasheeda got married to Kirk Frost in 1999 when she was just 21 years old. The couple has been blessed with two sons Ky who was born in 2000 and Karter who was born in 2013. Kirk is a reality television personality, businessman, and rapper.

There is no known information about her educational background. Rasheeda began her career as an adolescent. She and her friends formed the hip-hop girl group, Da Kaper. The group was signed with the recording label D-Lo Entertainment, with whom she continues to work.

Frost began her solo career a year later. Rasheeda released her album Dirty South on March 27th, 2001 through D-Lo & Motown Records. The album featured guest appearances from Pastor Troy, Thugz Nation, Nelly & Re-Re. The album achieved some notoriety, due to the success of her first single “Do It”.

Dirty South would place Rasheeda firmly in the southern hip-hop genre. In 2015, she released a new song on the 4th season of Love & Hip Hop: Atlanta titled, “I Meant It” reporting that the album for the song could be her final release. Also in 2015, she landed a guest role, with the character’s name of Scrumptious, on the 3rd episode of Fox’s Rosewood. In 2012, Rasheeda and her husband, Kik, landed a spot on VH1’s Love& Hip Hop: Atlanta.

Rasheeda Frost Net Worth and Salary

Frost has made a great fortune from her music career as well as her other business ventures. Her annual salary and estimated net worth is currently under review and will soon be updated.