Reid Scott is an American actor. He came into the limelight through his starring role as Brendan “Brando” Dorff in the TBS comedy series My Boys.  He also played Deputy Director of Communications Dan Egan in the HBO comedy series. 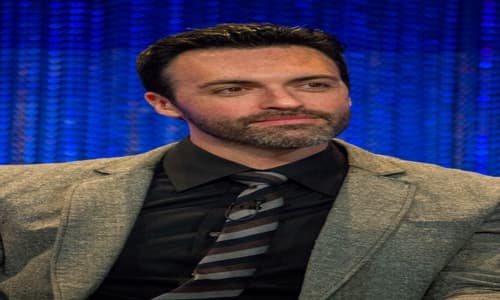 Scott’s parents are Kathleen (mother) and Neil Weiner (father). His father is Ashkenazi Jewish whereas his mother is French-Canadian as well as Irish and English. In addition, he has a younger sister by the name of Katianna.

Scott’s first marriage was with Elizabeth Anne Petrazzolo in 2004. However, the marriage did not last so they separated in 2007.
He has been married to his long-time girlfriend, writer, and actor Elspeth Keller since 21st June 2014. Together they have two sons named Conrad, born 31st March 2015, and Damon born on 4th January 2018.

Scott attended a boys military academy where he participated in the stage version of the film Dead Poets Society and a variety of Shakespearean productions.

Moreover, he was the first undergraduate from Syracuse University to receive a combined degree in directing.

Scott’s career began in the play Cargo with roles in the off-Broadway. He also did several television commercials. He received his Screen Actors Guild card in 2002 when he won the lead role in the Fox pilot ith You in Spirit. In addition, he said that he thought the money from the pilot was a fortune but] it was not. He said he had to borrow money from his father to join SAG because after renting a car to get around L.A. buying a new pair of shoes and paying off some debt.

Additionally, he has appeared in television and film most notably My Boys, an original series on TBS since then. Moreover, he appeared as Dr. Jeff Tseguay in an episode of Bones, on The Secret Life of an American Teenager. In addition, he appeared as Mike in Motorcity and as Seth Riggin in CSI: NY (episode 14, season 4). In 2010, he joined the cast of Showtime’s The Big C with the main character played by Laura Linney. He played Dr. Todd Mauer oncologist for the main character. Furthermore, he has appeared on the big screen in films such as Losing Control and Amusement.

Currently, he is co-starring as Dan Egan on HBO’s political comedy series Veep.

Moreover,  in the Netflix original animated series Turbo Fast he is voicing Turbo. It is based on the 2013 film Turbo.

In addition, he was The Intern in the Nancy Meyers film in June 2014. Award winners Robert De Niro, and Anne Hathaway also star in the film which was released on 25th September 2015.