Rome Trumain Flynn is an American model, musician, and actor. He is famous on the CBS daytime drama The Bold and the Beautiful for his portrayal of Zende Forrester Dominguez. Moreover, he won the Daytime Emmy Award in a Drama Series in 2018 for Outstanding Younger Actor. 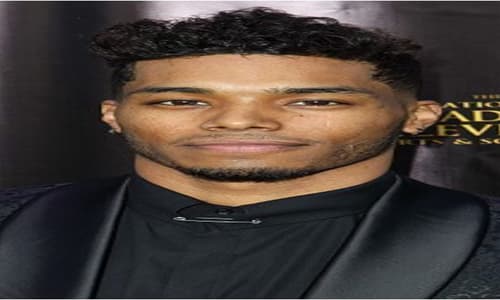 Flynn was raised single-handedly by her mother, Nickey Alexander in Springfield, Illinois. Moreover, he has six siblings.

Flynn dated Camia Marie, a model and social media personality in 2015. However, the two parted ways after several dates and memories. Moreover, he has a daughter, Kimiko with Molly Noriko.

The actor graduated in 2010 from Lanphier High School. In addition, he earned a college scholarship through playing basketball. He joined Benedictine University through a scholarship.

Flynn’s build-up of social media following helped him get on the radar of casting directors. He was cast in the television movie Drumline: A New Beat in the spring of 2014. This was the 2002 Drumline sequel. His daughter was born when he was on set filming.

Moreover, he joined the cast of The Bold and the Beautiful in May 2015 in the role of Zende. He announced that he had been cast in the film adaptation of Gretchen McNeil’s novel TEN opposite China Anne McClain in November 2016.

Furthermore, he guest-starred in episodes of the CBS crime dramas NCIS: New Orleans and MacGyver in 2017. Later, he joined the cast of The Have’s and Have’s Nots (OWN’s). Additionally, he announced on social media that he had chosen to leave The Bold and the Beautiful. The announcement came on August 17, 2017, after two years with the series.

He was upped to a series regular for the fifth season in 2018. This was after his appearance in the fourth season finale of How to Get Away with Murder.

Furthermore, he was cast as Tevin Wakefield in the Netflix series Raising Dion’s second season. This was announced on February 23, 2021. Moreover, the series was executive produced by Michael B. Jordan. It was announced on the same day that he had booked a recurring role of David. This role was for the fourth and final season of Justin Simien’s Dear White People. A series also distributed by Netflix. Furthermore, he joined Gloria Calderon Kellett’s With Love cast, produced by Amazon Studios. His role was Santiago Zayas.

2014 – Drumline: A New Beat as Leon, Two-a-Days as Quarterback
2015 – The Bold and the Beautiful as Zende Forrester Dominguez, Ten: Murder Island as TJ
2017 – NCIS: New Orleans aa Jonathan Rudd, MacGyver as Kalei, The Haves and the Have Nots as RK
2018 – The Thinning: New World Order as Jack, How to Get Away with Murder as Gabriel Maddox
2019 – A Madea Family Funeral as Jesse, A Christmas Duet as Jesse, 1/2 New Year as Bishop Miller
2020 – Family Reunion as Tony
2021 – With Love as Santiago Zayas, Dear White People as David.

2018 – Daytime Emmy Award under the category of Outstanding Younger Actor in a Drama Series, The Bold and the Beautiful which he won.