Shantel VanSanten is an American actress and model. Magazines Teen Vogue and Seventeen have featured her as a model. Additionally, she is best known for appearing on TV series The Flash, and One Tree Hill, and The Final Destination film.

Her birth name was Shantel Yvonne VanSanten. She was born in Luverne, Minnesota, United States on 25th July 1985. Therefore, she is 36 years old as of 2021 and celebrates her birthday on 25th July every year. 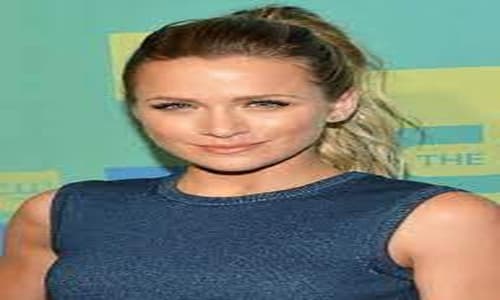 VanSanten was born in Luverne, Minnesota, United States. Her ethnicity is Caucasian and has American nationality. In addition, she has a sister by the name of Jessye Kellogg married to Zac Kellogg. Her grandparentsa are, Doris Evon Henrietta Sundem and Dewey Dooyema (maternal) and Nellie Van Hemert and Peter Van Santen (paternal).

VanSanten was in a short-lived relationship with James Laferty from 2008 to 2009. In 2016, she dated Jon Fletcher, a British actor. Moreover, she met actor Victor Webster in 2017 on the set of the movie Love Blossoms. They began dating and got engaged in February 2021.

VanSanten’s first appearance was as a finalist on NBC’s reality television series Sports Illustrated: Swimsuit Model Search. However, in the first episode of the series, she was eliminated. She had signed on in a film adaptation of the novel t.A.T.u. Come Back which was announced in 2007. Throughout 2007, the filming took place in Los Angeles and Moscow. It premiered in Russia on January 25, 2011 starring alongside Mischa Barton. In the United States as You and I a year later.

Moreover, in The Final Destination, the fourth installment of the eponymous horror film franchise in 2009, she appeared as Lori Milligan. On The CW television drama series One Tree Hill, she was cast as a series regular in the show’s seventh season in the same year. In addition, she was photographer Quinn James and on the screen sibling to Bethany Joy Lenz’s character. She continued her role until the series ninth and final season. In addition, the series 187th was the final episode. She was ranked #24 on its “TV’s 100 Sexiest Women of 2010” list and #21 in 2011 by Buddy TV.

Additionally, she starred as Christine in Something Wicked.  The late actress Brittany Murphy, who portrayed her sister-in-law Susan was featured in the film. She shot the film Golden Christmas 3 opposite Ron Mayes, Nikki DeLoach, Orson Bean, and Mark Famiglietti in the spring of 2012. It was shot in a family romantic holiday comedy directed by Michael Feifer. Additionally, on the television series The Messengers, she portrayed Vera Buckley before its cancelation after season one. In the second season of The CW TV series The Flash, she portrayed Patty Spivot. Furthermore, she played Detective Joe West’s (Jesse L. Martin) new protegee.

Additionally, she co-starred in the USA Network drama series Shooter from 2016 to 2018. In the final season of the TV show Scorpion in 2017, she played Amy. Also, she played Rebecca Butcher in The Boys.

Moreover, she voiced the character Wrath in the video game Apex Legends in 2019.

As of 2021, VanSanten’s net worth is approximately $5 million.