Spencer Williams is a financial crime analyst and a television reality star known for appearing in ABC’s dating reality series Bachelorette season 18 starring  Michelle Young. He is a former pro basketball player and a graduate of The College of Wooster.

Williams is 26 years old as of October 2021. He was born on August 11, 1995, in Warrensville Hts., Ohio. He celebrates his birthday on the 11th of August every year. The former pro basketball player is the youngest contestant of the Bachelorette season 18.

Williams is a tall guy. He stands at a height measurement of 6 feet and 2 inches. 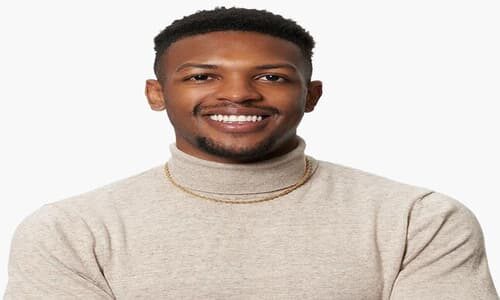 Williams is born to his parents Johhny and Chariss Baldwin-Williams.  Spencer’s parents celebrated their 22nd year marriage anniversary in 2014. He has a brother named Trae Jared Williams.

Williams is a single dad of one son. “His son is the inspiration that makes him want to be a better man every day.” (source: ABC Bachelorette profile).  His son is named Braylen. He does not disclose the identity of his son’s mother, however, he reveals that he has dated much since birth.

Williams obtained a Political Science degree from the College of Wooster. He pursued a master’s in governance, compliance, and data protection in financial services at the Letterkenny Institute of Technology. He studied at Orange High School.

Williams is one of the contestants of ABC’s reality dating show, Bachelorette (season 18) starring Michelle Young. Michelle Young is an elementary school teacher who was born in St. Louis Park, Minnesota. She is 28 years old as of October 2021.  Young was a contestant of Bachelor season 25 which starred Matt James. She finished as a runner-up.

For Williams, physical attraction gets his attention, but personality is what keeps it. He needs a woman with an open mind who will be vulnerable with him and challenge him to be the best version of himself. What matters most to him is what is in someone’s heart.  (Source: ABC bachelorette Profile)

Williams is currently a financial crime analyst at KeyBank in Cleveland, Ohio. He joined KeyBank in May 2020 as a Risk Management Analyst. He has previously worked as Personal Trainer and Youth Basketball Instructor.

Williams has an estimated net worth of around $200k- $500k. He has accumulated his fortune while working various jobs including his current job as a financial crime analyst.

Williams is active on Instagram. His Instagram handle is @trill_swill. He had over3300  followers as of October 2021. His bio states that he is a proud dad.