A native of Georgia, Michael Todd Chrisley is a real estate tycoon, producer, and actor. He goes by the name Todd and his family considers him easily irritated, controlling, and often unreasonable. In addition, he is known for Growing Up Chrisley (2019) and Sharknado 4:The Awakens (2016). 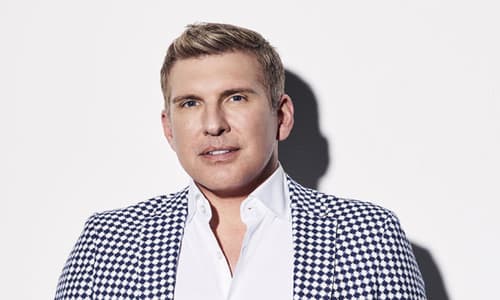 The real estate mogul was born in Georgia to his parents Faye (mother) and Gene Raymond Chrysley (father). His father had fought in the Korean War serving in the Army. To make sure they had everything they wanted and needed, his mother was working in a textile mill. However, his father, Gene Chrysley passed away from cancer in Atlanta, Ga two years before Chrisley Knows Best premiered. At the time of his death, he was 77 years old.

In addition, Todd had two brothers, Randy and Derrick. However, Derrick sadly died at just 4 months old in 1971 according to Networth Reporter.

Chrisley was married to Teressa Terry, his high school sweetheart from 1990 to 1996. Together, the couple had two children a son named Kyle and a daughter named Lindsie before their divorce.

Moreover, in 1996, he married Julie. Together they have three children, two sons named Chase and Grayson, and a daughter named Savannah.

Although Todd put a major emphasis on the importance of education for his children, he did not attend college. Three of his five children have attended a university so far.

Chrisley owns Chrisley Asset Management founded in 2002. Even as Mr. Chrisley and his family continue to live a very lavish lifestyle, the firm according to court documents has been struggling for a number of years. The family spends $300,000 per year on clothes and owns a 30,000-square-foot mansion. However, due to the 2008 housing market collapse, the company reportedly folded. After amassing close to $50 million in debt, the businessman filed for bankruptcy just a couple of years before Chrisley Knows Best premiered.

Additionally, part of Chrisley’s scaling back plan was their move to Nashville. Together with his wife, they were indicted on several counts of tax evasion and fraud adding to their woes in 2019. As per People, after they agreed to pay about $110,000 to the Georgia Department of Revenue, the couple was later cleared of all charges.

Chrisley’s days of being a businessman are far behind him although their financial drama appears to be over for now. Comparatively speaking, the hit show, accompanying advertising partnerships and publicity opportunities contribute to his bulk of income.

Furthermore, in 2016, said from TV hosting,  he released the Infinite Love country song with Sara Evans. He is a hypochondriac and germophobe.

Chrisley’s net worth is $5 million.