A native of Austin, Texas, Travis Long is a television reality star widely known for his appearance on CBS’s reality series Big Brother season 23. Long is currently (July 2021) working for Docforce as a VP for Global Sales. He is a fitness enthusiast, and at the Big Brother 2021 house, he asked for a gym as he would “go absolutely bonkers being unable to get a good workout and run in every day.”

Long is 22 years old as of July 2021. He has not disclosed his exact birthdate, and therefore we do not have information on when he celebrates his birthday.

Long is a tall guy. He stands at a height measurement of 5 feet and 11 inches. 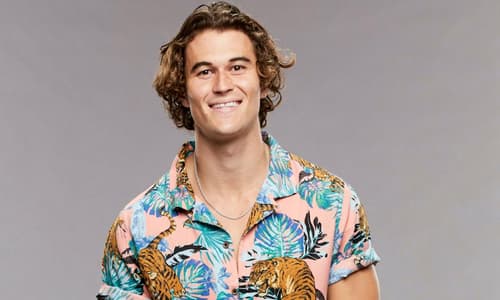 Long has not revealed any details about his parents. However, on answering what would be the most difficult thing during his stay at the Big Brother house, Travis said: “the inability to communicate with those I love outside the BB house.  Wondering how my friends and family are doing, what they are thinking of me and my actions, and how I can make them proud.”

In 2019, Long was dating his girlfriend named Katie Casey. The two posted pictures of themselves on their social media platforms. Katie uploaded a photo on her Instagram account on February 14, 2019 (Valentines Day), where she tagged Travis, and on it, she captioned “Happy Valentine’s day! ft. My love.”

As of 2021, it is not clear if the two are still dating because they were last seen together in 2019. If at all they broke up, Long has not disclosed his current relationship status; whether he has a girlfriend or he is just single.

Information on his current dating status will be updated as soon as it is available to us.

Long attended the University of Texas at Austin-Red McCombs School of Business where he graduated with a Bachelor’s degree in Business Administration 2017-2020). He also attended Universidad de Costa Rica in 2019, where he is pursuing a social entrepreneurship course.

Long is a contestant of CBS’s reality series Big Brother, season 23. He joins 15 other contestants to compete for a grand prize of $500K. When it comes to his favorite duo in Big Brother history, he says Brett and Winston were his favorite. He describes himself as “rambunctious, curious, and strong-willed.”

The other 15 contestants of Big Brother season 23 are:

Long is an entrepreneur and currently(2021) a Vice President of global sales at Docforce.  He joined Docforce in September 2018 as a Market Research Intern. In September 2019, he became a Sales Account Manager, and in December 2020, it is when he got promoted to his current position as a VP  of Global Sales. Prior to joining Docforce, he worked as a Writer and Editor at Austin Startups. He also worked at JobSiteCheck as a Sales Consultant, and at Peepteam as a Marketing Co-ordinator.

Long has an estimated net worth of between $100K and $300K as of 2021. He has accumulated his fortune over the time of his career in sales and marketing. An average annual salary of a VP of sales in Austin, Texas is around $152,288.

Travis has an Instagram account. His handle is @travisgarretlong. He had about 5k followers as of July 2021.