Ty Pennington born (Tygert Burton “Ty” Pennington) is an American television host, artist, carpenter, author, and former model and actor. He gained fame when he played a role as a carpenter on the TLC home improvement reality show Trading Spaces and continued when he hosted the ABC reality series Extreme Makeover: Home Edition, where he won two Primetime Emmy Awards.

He stands at a height of 5feet 11inches and weighs 75 kilograms. He has brown hair and blue eyes.

Pennington was born in Atlanta, Georgia. He was born to a mother named Yvonne Burton who is a school psychologist. He has a brother named Wynn. His mother divorced his father when ty and his brother were still young. Ty is of partial Cherokee descent. 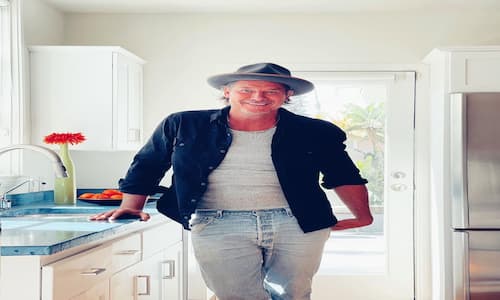 The American television personality, Pennington, is engaged to Andrea Bock. The two have been dating for a long time and reside in their own home in Venice Beach, California, United States. However, they are not officially married. Additionally, the couple is yet to have kids.

He went to Sprayberry High School in Marietta, Georgia, he first joined Kennesaw State University, where he majored in art and history. He transferred to the Art Institute of Atlanta, from where he graduated with a bachelor’s degree in graphic design. Pennington paid his way through college by taking night classes as well as serving during the day, first working in landscaping prior to moving into construction.

Pennington was approached by a modeling scout and soon began a lucrative career in that field. He landed print jobs for J.Crew, Swatch, and Sprite, and appeared in television spots for Diet Coke, Levi’s, Macy’s, and Bayer.

In 1995, Ty became a set designer for Leaving Las Vegas show. Additionally, he got his breakthrough through his innovative hit show Trading Spaces through The Learning Channel’s now known as TLC. In 2003, Pennington acted in the independent film, The Adventures of Ociee Nash (as Wilbur Wright).

When ABC began developing a show that would rehab the homes of deserving families in seven days or less in 2003, Pennington was chosen as the leader of the eight-person design team. Extreme Makeover: Home Edition, originally planned to be a 13-part special, became a huge hit, catapulting Pennington to stardom.

This led to an endorsement deal with Sears, a sponsor of the show. Pennington was extremely dedicated to the show, spending on average 240 days of the year working, and was known to have fought off anything from pulled muscles to heatstroke to food poisoning to keep doing his job.

He stated that his career on the show resulted in the channel’s commissioning Ty’s Great British Adventure, in which he worked with communities including Portreath, Cornwall (UK) to restore a run-down town park in a week and Portishead, North Somerset (UK) to renovate the town’s derelict outdoor pool into a community-run Lido.

The series was shown from September 16, 2008. When Extreme Makeover Home Edition ended in 2011 with its ninth season, Pennington had helped rebuild more than 200 homes for the show. Afterward, Pennington relocated from Los Angeles to New York City, where he was cast to take part in the lifestyle-based talk show The Revolution, which aired on ABC in January 2012.

When the show was canceled after six months, Ty began pursuing other goals. In January 2021, HGTV debuted Ty Breaker, a show that features Pennington helping families struggling to make their homes work for their changing lives.

Ty Pennington Net Worth and Salary

The American great designer, Pennington, has made a great fortune from his career. He has an estimated net worth of $12 million. However, his annual salary is currently under review and will soon be updated.