Trevor Howard Lawrence Jackson is an American singer, songwriter, dancer, rapper, and actor. He is best known for his portrayal of Aaron Jackson on Freeform original series Grown-ish. In addition, he is also famous for portraying Kevin Blake on Syfy’s original series Eureka, Kris McDuffy on Disney Channel’s television movie Let It Shine, as well as Kevin LaCroix on American Crime. 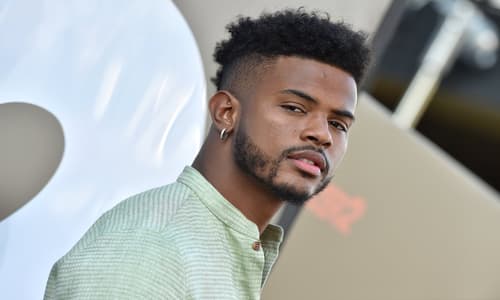 The actor was born in Indianapolis, Indiana, the U.S. to his parents Cam 9mother) and Kevin (father). He is the younger of two sons. The actor’s parents are African American. Moreover, his older brother is Ian.

Currently, the actor is single. However, he has been in a relationship with Zendaya from 2012 to 2016.

In 2010, Jackson’s TV career began with a guest role in the police procedural TV series Cold Case. Moreover, in the film ‘Albert! Or, My Life in the Ocean’, he made his film debut the same year. Similarly, he played a role in the sci-fi TV series ‘Eureka’ from 2010 to 2012. He appeared in the film ‘A Moment of Youth’ in 2011.

Additionally, in the 2012 TV film ‘Let It Shine’ which premiered on the Disney Channel, he played an important role. For his performance, he was nominated for a Young Artist Award. He also played the supporting role of Quincy Smith in the drama film ‘A Beautiful Soul’ the same year. Moreover, he played guest roles in TV series such as ‘Austin & Ally’ and ‘Criminal Minds’ in the ensuing years.

Furthermore, after he started playing one of the main roles in the crime drama series American Crime, his popularity reached newer heights in 2016. The series was met with much critical acclaim after it began airing in 2015. It received numerous nominations and awards. In the first season, it received ten nominations for the Emmy Awards and was nominated for two Golden Globe Awards.

Moreover, he played the lead role in the drama film ‘Burning Sands’ in 2017. He started playing one of the main roles in the American sitcom ‘Grown-ish’ in 2018. Additionally, the 2018 crime action film ‘Superfly’ is the actor’s most recent work which was an average success commercially with mixed reviews.

In his career, Jackson has released several singles so far such as Good Girl, Drop It, Know Your Name, and Apocalypse. His first mixtape was named ‘In My Feelings’ which he released in 2015. Moreover, he had previously 2013 put out an EP named ‘#NewThang’. Additionally, he released his first studio album ‘Rough Drafts, Pt. 1’ in 2018.

One of the actor’s early works was the American sci-fi TV series ‘Eureka’ which aired between 2006 and 2012. Covering 80 episodes, it aired for five seasons.

In addition, for his role in the second season of the American anthology crime drama series ‘American Crime’, he gained much popularity. The show was nominated for ten Emmy Awards winning one having been highly praised by critics.

Furthermore, in the action crime film ‘Super Fly’ which was released in 2018, he played the lead role. The film was the 1972 Super Fly film remake and received mixed reactions. Commercially, it was an average success earning $20 million on a $16 million budget.

Jackson’s net worth is $2 million.