Born Norman Mark Reedus, Norman Reedus is an American actor, model, photographer, and painter by profession. He is famous for starring as Daryl Dixon in the popular AMC horror drama series The Walking Dead. Also, he is best known for the film The Boondock Saints and its sequel The Boondock Saints II. 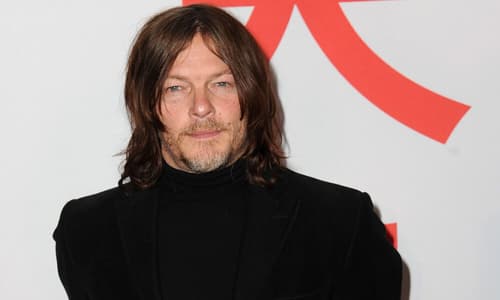 Reedus was born to his parents, Ira Norman Reedus(father) and Marianne (mother), a teacher. His paternal grandmother was of Italian descent while his grandfather had British and Irish ancestry. Additionally, he has one sibling, a sister named, Leslie.

Reedus was in a relationship with Helena Christensen, a supermodel from 1998 to 2003. However, the two have never married but have a son together by the name of Mingus Lucien born in 1999. They share joint custody of their son and have remained friends.

Moreover, he met Diane Kruger in 2015 during the filming of Sky and was seen together as a couple in July 2016. Kruger gave birth to their daughter (her first child and his second) in November 2018.

In his major film debut Mimic, Reedus played Jeremy. In addition, in Giovanni Rodrguez’s Red Canyon, he played Mac. in 1999, in the film Boondock Saints, he played Murphy MacManus. His role in the 2009 sequel The Boondock Saints II: All Saints Day was reprised.

He guest-starred in Charmed as Nate, (Paige’s boyfriend). Also, he played Scud in Blade II. Moreover, on July 7, 2013, he starred in Hello Herman. It was on-demand and opened nationwide. Currently, he is in the reality series, Ride With Norman Reedus. It premiered in June 2016 and he is the star. In addition, he has an overall deal with AMC the most recent one being Bigbaldhead Productions.

Reedus began playing Daryl Dixon in 2010 in The Walking Dead, the AMC television series. It is a horror drama about a group of friends and family members fighting to survive in a violent apocalyptic world. The world is populated with flesh-eating zombies and few surviving humans. However, the character was created specifically for Reedus. This was after his audition for the character of Merle Dixon. It was not originally in the comic book series of the same name. Reedus has come in and defined Daryl Dixon hence the comic creator, Robert Kirkman feel absolutely blessed.

Additionally, his portrayal of the character in the first season inspired all the writers. The drama has smashed all previous records hence has evolved into the highest-rated in cable history. His performance made him be nominated for a Saturn Award for Best Supporting Actor.

His role of Daryl is also set to reprise as the lead of a spin-off series. The series will be centered on his character and Carol Peletier. This is following the 11th and final season of The Walking Dead conclusion. The show is set to debut in 2023 with Angela Kang show running.

In the video game The Walking Dead: Survival Instinct based on the television series, Reedus reprised his role as Daryl Dixon. However, Kojima left Konami making the game to be canceled. Reedus was set to star in Hideo Kojima and Guillermo del Toro’s reboot horror game Silent Hills. Furthermore, in Hideo Kojima’s video game, Death Stranding, he starred.