Sunny Anderson is an American professional cook and TV/Food Network personality. She gained public recognition for hosting How’d That Get On My Plate? in 2008.

Anderson has a height of 5’5″ (1.65 meters). She has not, however, provided any information about her weight or other physical measurements. We’re keeping an eye on her, though, and will update this information as soon as it’s available.

Anderson was born to her parents in Lawton, Oklahoma, although she grew up as an Army brat. Her father Thomas Anderson was a military/army man while her mother was a homemaker. Both her parents were food enthusiasts. She was raised alongside her brother whose identity is still under review. 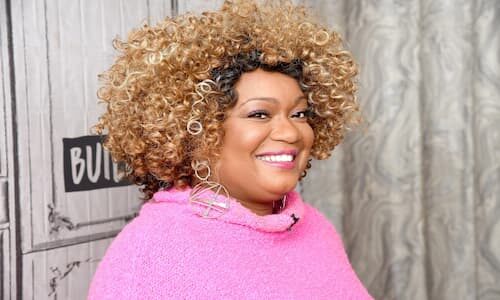 Anderson is not yet married. Although in 2013 she was in a relationship with Chef Aaron Sanchez after his divorce. In 2019, she stated in an interview that she was dating someone, but she never revealed their identity. When information regarding her love life is available, we will share it on the page.

Anderson graduated from Madison High School in San Antonio, Texas. She then joined the United States Air Force in June 1993, earning the rank of Senior Airman. Also, she worked as a military radio presenter in Seoul, South Korea. For her undergraduate education, she went to Loyola University in New Orleans.

Anderson served as a radio host at KCJZ and KONO-FM in San Antonio, WYLD-FM and KUMX in Fort Polk, Louisiana, WJWZ in Montgomery, Alabama, and WDTJ in Detroit, Michigan between 1995 and 2001.

She worked as the Food and Lifestyle Editor for Hip Hop Weekly magazine in 2006 and 2007. Anderson joined Jeff Mauro, Katie Lee, Marcela Valladolid, and Geoffrey Zakarian as co-hosts on the Food Network series The Kitchen in January 2014.

She has appeared as a guest chef on The Rachel Ray Show, Good Morning America, The Early Show, The View, The Talk, and The Wendy Williams Show, among other talk shows and morning news programs.

Anderson’s net worth is believed to be $5 million. Her yearly pay, on the other hand, is presently being reviewed and will be revised soon on the page.