Born Angela Michelle Harmon, Angie Harmon is an American actress and model. She is famous for her role as Detective Jane Rizzoli on the TNT series Rizzoli & Isles. 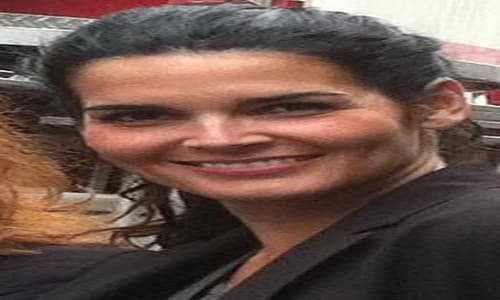 Harmon was born in Highland Park, Texas to her parents Daphne Damar (nee Caravageli – mother) and Lawrence Paul “Larry’ (father). Her father is a hospital information network executive in Dallas, Texas. In addition, her mother is of Greek descent and her father has German and Irish ancestry.

Harmon appeared as a guest on The Tonight Show with Jay Leno when Leno called JasonSehorn, former NFL player, out as a surprise guest. This was on March 13, 2000, when Sehorn immediately walked up to her knelt down on one knee, and proposed. She became engaged to him and later married on June 9, 2001. They have three daughters together named, Finley, Avery, and Emery. However, after 13 years of marriage, they both announced their separation in November 2014.

Until 1990, Harmon attended Highland Park High School where she was a member of the Highland Belles. Afterward, she won a Spectrum Model Search contest. She became well known in the early 1990s and subsequently pursued a successful modeling career. Moreover, she is signed with IMG Models in New York City. She appeared on the covers of ELLE, Cosmopolitan, and Esquire and worked as a runway model for Giorgio Armani, Calvin Klein, and Donna Karan.

David Hasselhoff discovered Harmon’s acting skills in 1995 on a plane. Then she had a leading role in the short-lived C-16: FBI and Baywatch Nights. Moreover, she appeared in Lawn Dogs, a 1998 film that received only a limited theatrical release. She joined the NBC series Law & Order in the late 1990s which made her famous playing ADA Abbie Carmichael from 1998 to 2001. She also succeded Stockard Channing in voicing Barbara Gordon in the animated film Batman Beyond: Return of the Joker during that time.

Moreover, she said that she preferred working in film to television hence leaving Law & Order to concentrate on her film career. She played the CIA handler of a teenage agent (Frankie Muniz) as a supporting role in Agent Cody Banks in 2003. This was after her appearance in the 2001 direct-to-video film Good Advice. In addition, in the direct-to-DVD political suspense drama End Game, she co-starred with Cuba Gooding Jr. and James Woods.

Furthermore, she starred in an ABC pilot Secrets of a Small Town in 2006 which did not go to series. In the failed television show on NBC, Inconceivable, which was canceled after two episodes, she starred. Moreover, she starred in another ABC pilot, Women’s Murder Club, which aired for thirteen episodes in the year 2007.

Alongside Gabrielle Union, Zoe McLellan, Jill Scoot, and Ana Ortz she posed discretely nude. This was for the May issue of Allure magazine.

Additionally, in 2010, she appeared in an infomercial for Olay “Pro-X” wrinkle cream and hosted a stress-management program, an infomercial for “Upliv”. In the TNT crime-drama series Rizzoli & Isles, she co-starred with Sasha Alexander playing Boston police detective Jane Rizzoli. This was from 2010 to 2016. Moreover, she directed the series ‘100th episode and the show premiered July 12, 2010.

In Craig Morgan’s music video, This Ole Boy, which was released in January 2012, she appears. Furthermore, she revealed on Conan O’Brien’s late-night series that she was a fan of and very interested in playing a movie version of the She-Hulk from Marvel Comics. This was during promotions for a new season of Rizzoli and Isles in July 2012.

Moreover, in a Leading Role in a Drama Series for Rizzoli & Isles at the 2012 Gracie Allen Awards, she won Outstanding Female Actor.

She signed a multi-picture development deal with Lifetime in June 2021.

Harmon’s net worth is $30 million.